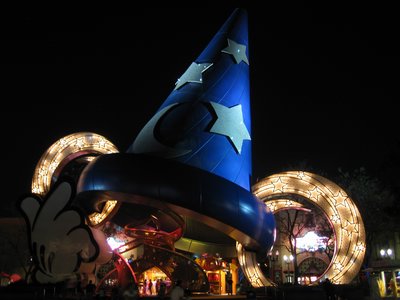 The Hollywood Studio’s Hat – Should It Stay or Go?

Many folks have very strong feelings about the gigantic Mickey Mouse Sorcerers Hat sits at the end of the Hollywood Boulevard in Disney’s Hollywood Studios. Let’s take a look at some of the history and rumors behind this in interesting artifact.

Let’s look back at the genesis of Disney’s Hollywood Studios, originally known as the Disney-MGM studios. Universal had just announced its intention to build a Studio theme park in Orlando, providing some serious competition to Disney for the first time. Disney’s then CEO, Michael Eisner, was not going to sit idly by as Universal came into town in stole business away from Disney. Eisner announced Disney’s Studio Theme Park after Universal announced theirs, and managed to open his Park before Universal opened Universal Studios.  It was an amazing feat, and I can only imagine how much overtime went into making it happen.

Early on, the park seemed a have two different icons. One was the Earful Tower, the water tower with gigantic Mickey Mouse ears. The other was that beautifully designed Grauman’s Chinese Theatre that sat at the end of Hollywood Boulevard.

Since the Studios theme park was always about the idealized version of Hollywood, selecting Grauman’s Chinese Theatre as a signature icon and important landmark for the park made perfect sense.

The original, real Grauman’s located in Hollywood opened in 1927. It was the home for countless world premieres of famous movies.  It was also well known for its famous sidewalk featuring the hand prints and signatures of stars immortalized in cement.

At Disney, this theater fit both the era and the theme of the Hollywood Studios theme park.

Through 2001, Grauman’s Chinese Theatre acted as the “weenie” for the park. Just as Cinderella Castle acts as a landmark which draws people down Main Street USA (a concept that Walt named a “weenie”), the theater also acted as a landmark and drew people down the main entrance street for the park – Hollywood Boulevard.

But the something happened. In 2001 Disney constructed the Sorcerer’s Hat directly in front of the Chinese theater. The hat itself is about 120 feet tall. Beneath the hats sits an open air pin trading store, where guests can purchase and trade pins.

There have been many rumors on why Disney added the Hat. Some believe that Disney was trying to avoid legal troubles with the company that owned the rights to the original Grauman’s Theater. Others, in perhaps a more believable scenario, thought that Disney was concerned about making an icon for one of its Parks out of a real-world building it did not control.

The public relations folks at Disney originally tried to spin the installation of the Hat as a symbol of the magic that Hollywood creates, combined with the imagination of Disney. And their concept may have been true from a marketing or executive standpoint.

However, it doesn’t seem to fit with the architectural design of this area of the park. We can only guess how many Imagineers cringe when they see this huge Hat unceremoniously dropped into the middle of their carefully recreated 1930s art deco styled Hollywood recreation.

What Will The Future Hold?

Disney has been investing heavily in its Orlando area theme Parks. The Magic Kingdom is getting its Fantasyland expansion, Disney’s Animal Kingdom is getting the new land based on the Avatar movies, and even Epcot is getting some attention with an updated Test Track attraction.

It seems that Disney’s Hollywood Studios is due for a refresh. Do you think the Hat should stay or go?