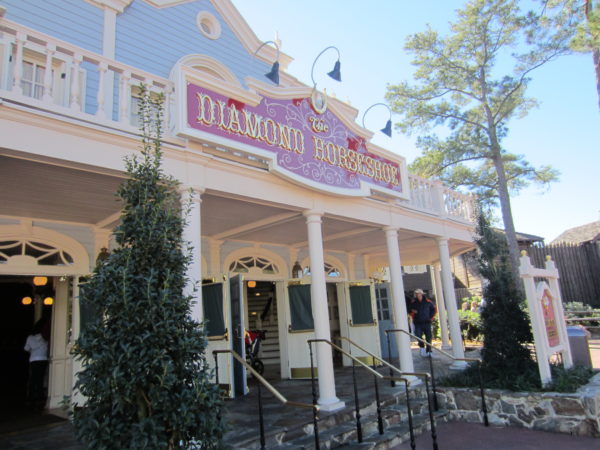 The History of The Diamond Horseshoe

Walt loved westerns, so it should come as no surprise that he created a restaurant with a western theme. The Diamond Horseshoe Revue was an old west musical saloon set in the 1870s with singing, dancing, and comedy.

Let’s take a look at the Diamond Horseshoe restaurant.

The first Diamond Horseshoe restaurant was in Disneyland, and it opened on July 15th, 1955. That’s two days before Disneyland opened to guests.

Because Walt and Lillian were so excited about the show that they opened it early to celebrate their 30th wedding anniversary, which was actually two days earlier – on July 13th.

After their private show, Disney reserved a private box for his family so he could see the show anytime he wanted to.

Diamond Horseshoe Revue was an opening day location in Magic Kingdom on October 1, 1971. The show was very similar to the one in Disneyland since the writer and comedian, Wally Boag, briefly relocated to Florida to get the new show up and running at the new park.

The “new” show also featured live music, sing along songs, and a can-can welcome with Slue Foot Sue. Pecos Bill even made an appearance.

The hour-long show was performed sometimes ten times daily until it was changed on October 1, 1986. At this point, the show was recognized in the Guinness Book of World Records as the longest running stage show of all time.

If you still want to see the original show, or something close to it, you’ll have to fly to Tokyo Disneyland. The only difference is that this show focuses more on characters than the original one did. The Disneyland Diamond Horseshoe is a shell of what it used to be functioning only as a quick-service restaurant with no entertainment and a limited menu.

Changes, they are a comin’

The 1986 changes renamed the show the Diamond Horseshoe Jamboree and required Advanced Dining Reservations for the first time, which could only be made by arriving at rope drop and going straight to Disneyana Collectibles on Main Street USA.

Nearly 10 years later, the show changed again and went under the Diamond Horseshoe Revue again. However, the menu was changed significantly and the restaurant went from a table-service restaurant to a quick-service restaurant. This version closed on February 1, 2003.

In recent times, the Walt Disney World version was a seasonal table-service restaurant with ADRs available, but there’s also no show here and the stage is empty with the exception of a player piano. Lunch was served from 1pm until 2:55pm; dinner started at 3 and goes until 7.

Have you ever visited the Diamond Horseshoe?  What did you think?