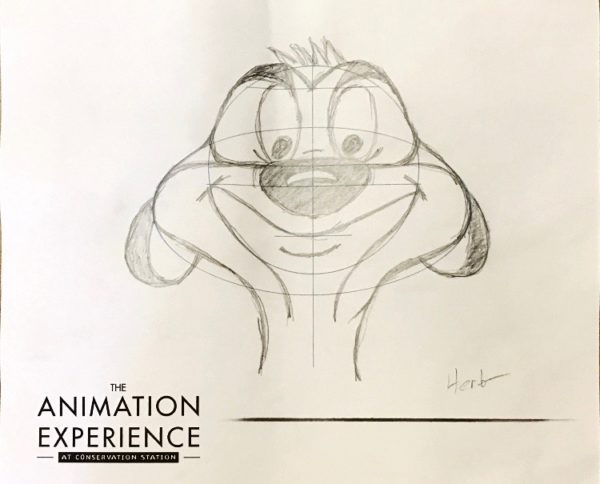 Learn to Draw at The Animation Experience in Disney’s Animal Kingdom (Video, Photos)

Do you remember when you could take an animation class at one of the Disney resort hotels or Disney’s Hollywood Studios? These were a favorite for guests because it felt very “Disney.”

The animation classes were largely removed from the resorts, and Hollywood Studios replaced their location with the Star Wars Launch Bay. It looked like this popular activity was gone forever.

Separately, another attraction with an uncertain future was Rafiki’s Planet Watch and Conservation Station.  They closed in October, 2018.

Now, both are back, and they’re together for the first time!

Rafiki’s Planet Watch reopened on July 11th, 2019 in Disney’s Animal Kingdom, and the area, which is only accessible via the Wildlife Express Train, is sporting a brand-new activity! The Animation Experience is located inside the former Song of the Rainforest booths.

Guest animators can learn to draw a variety of characters. For now, characters are limited to those who appear in The Lion King (Simba, Zazu, Pumbaa, Timon, etc.) in honor of the live-action remake of the 1998 animated movie, but you’ll soon be able to learn how to draw Thumper, Bellwether, Pua, Djali, Louis, Kaa, and more. Disney can easily change the line-up, so be sure to visit often for a different experience each time!

The Animation Experience does have a FastPass+ option, but it seems like it typically is not necessary at this point as the studio has plenty of seating available.

When you arrive, you’re given a pencil (without an eraser), and clip board, and a sheet of paper with some pre-set guidelines. When the experience begins, an animator will show you a video of the character you will draw then turn on an overhead camera (like the kinds used during cooking demos at the Epcot International Food and Wine Festival) and guide you through the process of drawing the character step-by-step. Each session is about 20 minutes, and sessions are held every 45 minutes throughout the day.

Check out this full video for detailed, step by step instructions on how to draw Timon from The Lion King.

Here is my resulting artwork.  Not perfect, but the Disney Cast Member makes it easy to follow her step-by-step instructions so that anyone can create a little Disney work of art.

If you’re super proud of your creation, you can also purchase a frame for $39.99 and display it proudly.

If you need more inspiration, take a note from the greats! There are photos of Walt Disney and some of his animators including Ollie Johnston and Frank Thomas, who is pictured with a live dog as inspiration.

The rest of Rafiki’s Planet Watch is largely unchanged. You can still visit the Affection Section and pet all the friendly animals, but the Rafiki and Doc McStuffins meet and greets have been removed.

Rafiki’s Planet Watch adds capacity for the throngs of crowds expected for the Star Wars: Galaxy’s Edge opening in August, and there’s no telling if the new attraction is permanent or temporary or how long Rafiki’s Planet Watch will stick around. A permanent Animation Academy is also slated for Epcot’s new Play Pavilion.

Will you visit the new Animation Experience in Animal Kingdom?