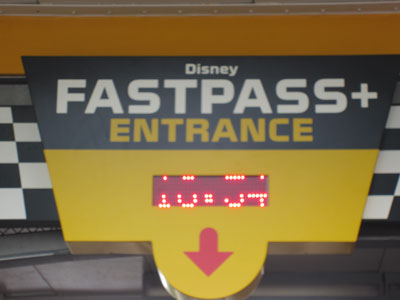 Disney Continues Testing Of FastPass Plus

The Imagineers hard at work on NextGen at Walt Disney World just wrapped up another phase of testing that ran from June 20-26, 2013.

According to sources, Disney invited guests staying at Disney’s Animal Kingdom Lodge and Disney’s Contemporary Resort to participate in the test using MagicBands (the new wristband – with optional decorative accessories – that is rumored to hold your tickets, hotel room key, charging privileges, and FastPass-like access privileges).

Today any part guest can use FastPass – where you put your admission ticket into a machine and get a piece of paper that tells you when you can return to the attraction with little wait. But as part of this test Disney also identified certain attractions for FastPass +.

At least for the purpose of this test, FastPass + differs from good old FastPass in three important ways:

1 – With FastPass + you make reservations in advance, just like you do for dining.

3 – With FastPass + there is no paper ticket. Everything is tied into your MagicBand and is managed either using the My Disney Experience web site or mobile app.

Disney identified many different attractions as either FastPass or FastPass + as part of this test. Let’s take a look:

Will Disney Eventually Charge For This?

At this point nobody, perhaps even Disney itself, knows what – if any – of the pieces of NextGen will require extra payment or require a stay at a certain level of Disney Resort Hotel.  Many other parks like Universal Studios already charge for ‘line jumping’ privileges.

However, I think a comment that Disney’s Chief Financial Officer Jay Rasulo made a comment on a company earnings call was promising. He said that a big driver for NextGen was to get people to plan their Disney vacation in advance. When guests plan in advance, they stay at Disney longer (vs. heading to other Orlando parks) and spend more money at Disney.

But time will tell.

What do you think about this FastPass + test?