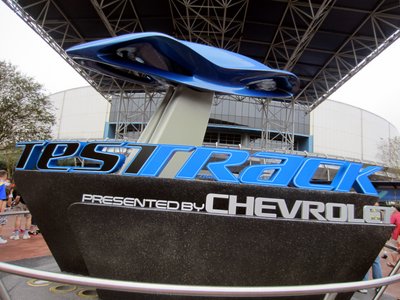 Test Track 2.0 at Epcot (With Photos And Video)

On December 6, 2012 Disney World officially unveiled version 2.0 of the Test Track attraction in the Future World section of Epcot, again reopening the popular attraction. The ride had closed for a lengthy refurbishment and redesign in April, 2012.

The latest edition of the ride follows the same track but has a brand new look based on a story of designing an automobile and then taking it for a ride, as compared to the original version of the attraction which was focused on automotive testing.

While the track itself is unchanged, so much is different that the ride looks completely different. Instead of looking like a testing facility as with the original design, the new design looks like something straight out of Tron, with many dark spaces punctuated with vibrant colors and computer projections. It’s as if you are seeing the world through the eyes of a computer simulation.

As you enter the building you receive an RFID card. It looks like a blank, white plastic credit card with a blue rubber band to help you keep hold of it. You use the card to carry your personal car’s design from the design station to the ride and through to the various exhibits in the post-show area.

During the design process, you touch your RFID card to the glowing circle. By the way, that glowing circle seems to be the de-facto representation of the NextGen / FastPass Plus system, which I suspect will tie into the new Test Track computer station when it comes online.

You then select your car’s design attributes. In the Single Rider and FastPass areas, this is an abbreviated process. In the regular standby queue, you have many more options like color, wheel, shape, engine type, etc.

Before you step into the ride vehicle, you again touch your RFID card to a glowing circle in the load area. In this way you can see how your personal car’s design measures up on various screens shown throughout the ride.

As mentioned before, the track for the ride itself if unchanged, but nearly everything around the ride is different.

In the post show area, you can again use your RFID card to make a commercial for your car, take your design on a virtual race track, or take a photo with it. You can send the photos to others or yourself at home by specifying an e-mail address.

On the way out you pass by a Chevrolet Showroom where you can see some of the latest models on display.

And before you walk out the door you encounter a retail opportunity where you have a chance to purchase many different Chevrolet branded t-shirts and toys.

There are many tributes to the World Of Motion, the attraction that originally occupied the space where Test Track now sites. You can see the class circular logo in a number of places.

If you would like to see what it is like to ride on Test Track, check out the video below.  There is wind noise at some points, but the visuals give you a good feel for the modern look of the ride.

What do you think about Test Track 2.0?