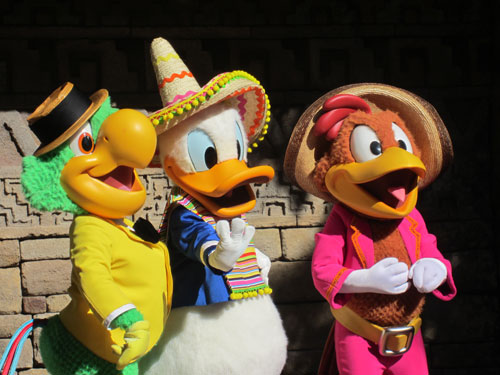 Epcot is a really great place to meet characters because most of the Meet & Greets take place in the character’s native country. With only a few exceptions, the characters appear in or near their country’s pavilion allowing you to experience different cultures in a fun, Disney way.

As soon as you enter the park, you’re greeted with the breathtaking site of Spaceship Earth, the iconic geosphere. If you head to the right of this attraction, you’ll find Daisy Duck! She’ll occasionally be swapped out for another classic character, but meeting Daisy here is usually a good bet.

Also in Epcot’s Future World is one of the best places to meet characters: The Epcot Character Spot. Inside, you’ll find seven characters spread over several areas.

First, you’ll meet your Big Hero 6 friends, Baymax and Hiro, whom you can’t find anywhere else! I should note that Baymax is always here, but Hiro is occasionally off doing experiments.

Next, you’ll find Inside Out’s Joy and Sadness. If you want to know what’s going on inside 11-year-old Riley’s head, don’t miss meeting two of her favorite emotions.

Finally, the Disney classics are always a favorite. Mickey Mouse, Minnie Mouse, and their pal Goofy join their new Disney friends here, too.

If you met Daisy on your way in, be sure to stop in Mexico to meet Donald Duck, possibly together with the other Thee Caballeros, as you start your journey around Epcot’s World Showcase. He’s to the right of the pyramid tucked behind some landscaping. Just look for some people gathered around, and you’ll find him. He’s quite a sight all dressed up in a colorful sombrero.

In China, you can meet one of the bravest Disney princesses: Mulan! She’ll greet you in the front garden area, so you can’t miss her. If you have young girls, she’s a great character to introduce because she’s a really good role model.

Germany is home to the original Disney princess: Snow White. You’ll find her by the wishing well, and she’s occasionally joined by her seven friends!

Jasmine and Aladdin, Disney’s most romantic and adventurous couple, live in Morocco. The line for this power couple is usually pretty long because there are very few places to meet the Disney princes. If Jasmine or Aladdin are on your little princess’s or prince’s favorite character list, get there early!

Belle, Disney’s book-loving princess, can be found in the France pavilion but more accurately where France becomes Morocco. She’s in a pretty obvious open-air location beside the water. Since she’s right along the path, she’s easy to find and thus almost always busy.

Alice, from Alice in Wonderland, can be found in The Tea Caddy Garden. She’s also out in the open air, but her lines aren’t usually very long. Because of this, she really takes her time with guests.

United Kingdom really gives you a two for one deal because Mary Poppins also appears here! Be sure to check the MyDisneyExperience app or the times guide because she isn’t always around on the weekends.

Anna and Elsa now have their home in the Norway pavilion’s Frozen Ever After ride. The lines to meet them have historically been very long- even up to a few hours- but that seems to be calming down a bit.  Still, if Anna and Elsa are on your list, get there as soon as possible.

Do you enjoy meeting characters in Epcot?