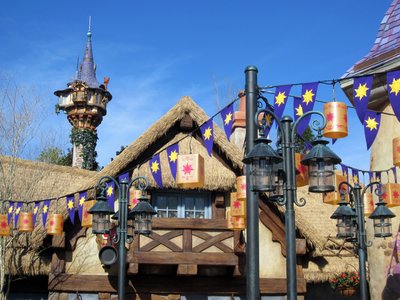 Disney World continues to complete projects as part of the huge Fantasyland expansion. The latest is the opening of the new rest area based on the Tangled movie.

The area does not include any new attractions, shows, or meet and greet locations (although it seems that this would be a perfect way to create a place to see and visit with Rapunzel and Flynn Rider from the movie).

Instead, the area includes an expansive set of men’s, women’s, and companion bathrooms. Normally a new set of bathrooms isn’t a big deal, but as with all things Disney, these are special.

The buildings that hold the restrooms and the surrounding area are highly themed with great detail. There are hanging banners and lanterns, posters featuring characters from the movie, and even a waterfall and creek that add a sense of peace and calm with the flowing water. In the distance you can see the tower where Rapunzel lived.

A Place To Sit

In addition to the restrooms, there are tables and chairs for just hanging out. These are also nicely themed, made to look like barrels and tree stumps.

In a first for Disney, there are electrical outlets where you can sit and recharge all your electronic devices like phones, cameras, and tablet computers. The outlets are cleverly hidden behind a door in the tree stumps.

Let’s take a looks at some of the great details in this area:

As part of this new expansion, there is now an additional pathway that connects Fantasyland to Liberty Square and the Haunted Mansion. In the past, when going from Liberty Square to Fantasyland, you needed to take a path to the right of the Yankee Trader shop that passed under a second story overhang of the Columbia House restaurant. Now, there is an additional path open between the Yankee Trader and the Haunted Mansion – making more areas that allow movement between Fantasyland and Liberty Square – and providing a way to even out traffic flow.

For People And Vehicles

Interestingly, in addition to having traffic flow issues in this area during the day, I once heard that this area of the Magic Kingdom was problematic for park operations at night. The only path between Fantasyland and Liberty Square, which went under the Columbia House restaurant’s second story, had a low overhang that prevented trucks and other service vehicles from easily getting from Liberty Square to Fantasyland (and vice versa). The new layout and paths should help not only pedestrian traffic while the park is open during the day, but also Disney park operations vehicle traffic when the park is closed at night.

What do you think about the new Tangled rest area?