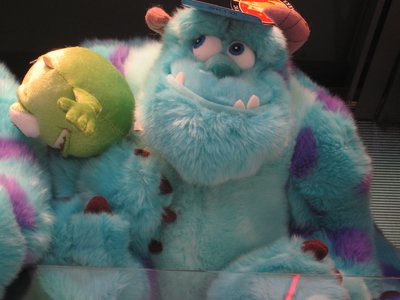 Tablets, such as the iPad from Apple and Android devices from Google, are small touch-screen computers typically a bit smaller than the average laptop computer. They are designed to combine the portability of a smart phone with the full-functionality of a personal computer.

Several major projects around the Disney resort universe are have capitalized on the possibilities offered by these new tools. The projects include the new Cars Land at Disneyland Resort’s California Adventure, the Hawaiian Aulani Resort, and the huge Fantasyland expansion at Magic Kingdom in Florida’s Walt Disney World Resort.

The data storage and Internet access abilities of tablets are lightening the work and carry load of the Imagineers involved with the initial brainstorming. Instead of toting around extensive reference books filled with rough drawings and inspiration, designers can access all the reference material for a project from the tablets’ hard drives or by connecting with information stored in the cloud. Designers can also use the internet to add new images and files to the existing content on the spot.

Even more revolutionary are the opportunities tablets provide for 3-D design and virtual realization. Designers and technicians can now work together to create fully detailed 3-D models for rides, buildings, and other resort spaces. This allows the technical and creative forces at Disney to identify problems and resolve design flaws while the project is still in its conceptual stages.

Even Disney cast members who will be working in newly-designed spaces can provide input before construction begins. For the first time, 3-D rendering allows cast members to explore spaces even without the ability understand two-dimensional technical drawings. Head chefs and other skilled members of the Disney team can now give their new workspaces the seal of approval before anyone hammers a nail.

The visualization tool that Disney is using for their new projects is known as Building Information Modeling (BIM). This tool has changed the Disney design process from an assembly line process into a true collaboration. Where Disney Imagineers used to pass projects down the line from the creative contributors to the technical contributors, is now a back and forth conversation from the beginning.

The Aulani Resort & Spa on the Hawaiian island of Oahu was the first Disney project to employ tablets for design and construction. Now, Disney theme parks are also getting the tablet treatment for a couple of major expansions. Cars Land, the recently-opened addition to Disney’s California Adventure, gives visitors the opportunity to ride the cars from the popular Pixar film.

Even more elaborate is the new Fantasyland opening in stages at Magic Kingdom. This major expansion is adding new restaurants, attractions, character greeting forums, and more to the area. Some parts of the expansion are already open to the public, while others will be opening at various intervals between now and 2014.