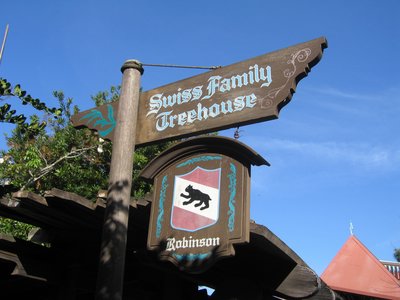 The Swiss Family Treehouse is a reproduction of the elaborate tree house in the 1960 live action Disney film Swiss Family Robinson. The treehouse features several different rooms spread about the branches of an enormous artificial tree that towers six stories above a waterway and the walkways of Adventureland.

Fun for Fans of the Film

Swiss Family Robinson tells the story of a family with three sons who find themselves shipwrecked in an unpopulated island in the East Indies. The film was one of Disney’s earliest live action films, and features a pirate battle, tigers, elephants, hyenas, and other ingredients for rollicking adventure.

In order to survive, the family salvages as many amenities as possible from their wrecked ship and builds a house in the trees in order to be safe from wild animals. The resulting tree house is quite possibly the coolest and most complex tree house in existence, and it was a natural addition to Adventureland at Disneyland after the film’s release and popularity. Opening as one of the debut attractions when Magic Kingdom opened in 1971, a new Swiss Family Treehouse was a hit.

The Swiss Family Treehouse is almost certainly more fun for visitors who have seen and enjoyed the film. It includes numerous bits and pieces taken directly from the motion picture, right down to the lively polka tune that now plays perpetually on the salvaged piano. However, most kids will enjoy the journey through the tree house even without having seen Swiss Family Robinson. After all, what kid hasn’t dreamed of living in a tree house at one time or another?

Wooden stairs and walkways take guests up into the branches of the tree house, while plank bridges composed of wood, rope, and bamboo connect the various rooms of the house. Although the tree has the appearance of a real trunk, branches and leaves, and the buildings the appearance of a genuine wooden tree house, everything is in fact reinforced with steel and concrete.

After you climb several flights of stairs to reach the tree tops, the first stop at this attraction is the parlor area where the family spends the evenings together. Dishware, furniture, lamps, and the polk-ing piano all decorate this room.

The second stop is a bedroom next to a signpost that indicates a jungle lookout. And lookout you should, since the vantage point provides a great view across Adventureland. The bedroom itself is nicely laid out with an antique headboard, quilted bed covers, lace-trimmed pillows, and even a vase of flowers.

The boys’ bedroom is next, fitted out with hammocks, blankets, bedside tables, and other salvaged luxuries. Further down are the open-air library and kitchen, and a dining table all laid out with a meal. As you climb up and down, you can admire the water wheel and bamboo buckets that carry water up to the top of the tree.

Due to the large number of stairs and uneven walkways, the Swiss Family Treehouse is not accessible to visitors who are not independently mobile. However, it is a child-friendly attraction, and parents who prefer not to make the trek can send their children through the path and meet them at the exit.

Although there is a queue area set aside for the Swiss Family Treehouse, the fact that guests can enter freely and move at their own speed through the attraction means that there is rarely a wait. If the little ones (or grown-up ones) are eager for something to do after waiting in line after line, the Swiss Family Treehouse can provide an immediate dose of amusement.