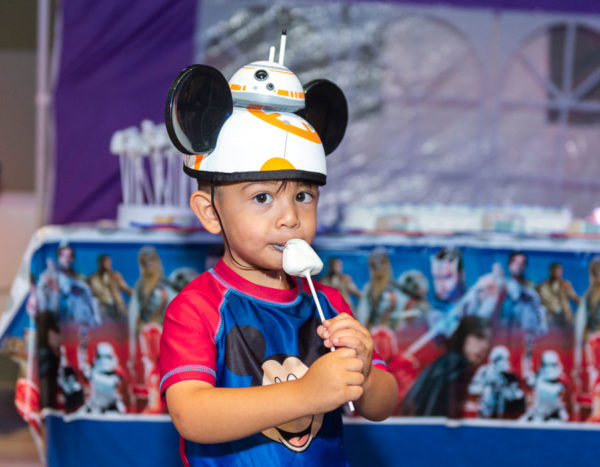 Star Wars: Galaxy’s Edge will open in Disney’s Hollywood Studios on August 29th, but ahead of this much anticipated opening Disney is welcoming some special guests to check out the largest single-themed land Disney ever built. First, Cast Member Previews started at the beginning of the month. Last week, Boys & Girls Clubs of Central Florida visited Batuu.

This week, Wish Families were welcomed into the land!

Make a Wish fulfills wishes of thousands of kids each year with 8,000 wishes every year being Disney-themed. Earlier this week, 140 Wish Families were invited to a special celebration at Give Kids the World Village where they were gifted with Star Wars-themed accessories including ear hats, t-shirts, buttons, and Batuu treats and told they would be visiting Galaxy’s Edge!

Give Kids the World Village is a not for profit resort, located about 30 minutes south east of Magic Kingdom, gives children with life-threatening medical conditions and their families a weeklong, no-cost vacation to Disney World, who has supported the resort since it opened in 1986.

Next week, Galaxy’s Edge will host Annual Passholder Previews, and the media event will take place on August 27th and 28th, which I will be attending!

Will you be getting a Galaxy’s Edge Preview?