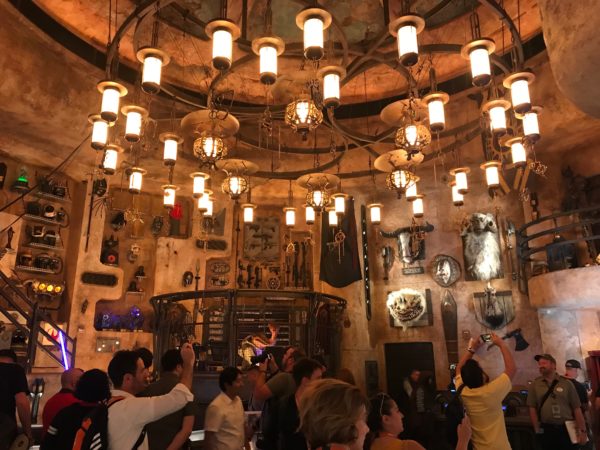 Star Wars: Galaxy’s Edge – Thanks for Joining Me!

I’ve spent the last week in Disneyland thanks to the amazing folks at Walt Disney Company. I got to explore the new Star Wars: Galaxy’s Edge, and I had so much fun sharing my experience with you.

I sincerely thank you for joining me for the whole experience!

Star Wars: Galaxy’s Edge is now open to the public! Here’s what you need to know going forward!

Even though Star Wars: Galaxy’s Edge is open to the public, you have to have reservations to get in. From now through June 23rd, valid park admission and reservations are required. Reservations are available to guests staying at a Disneyland Resort Hotel, and Disney will notify you of your reservation date and time.

This means that there will be no standby lines until after June 23rd.

Disneyland doesn’t have a FP+ system like Disney World does, but they will implement a virtual queuing system to manage demand as needed so guests can explore the rest of Batuu instead of standing in line.

Once your boarding group is ready, you’ll receive a push notification, so be sure that you also turn on your notifications. Signage throughout the park will also display boarding group status for guests who don’t have a smartphone.

Disneyland’s regular costume policy is in effect for Star Wars: Galaxy’s Edge. The policy says that guests over 14 years of age are not permitted to wear costumes, but Disney bounding is permitted.

Also, Disney is selling costume-like accessories – capes, belts, etc. that you can purchase and wear in Galaxy’s Edge.

Star Wars: Galaxy’s Edge will open in Disney World on August 29th. It will be nearly identical to the Disneyland version, but the west coast version was ready before the east coast version because Disneyland used a backstage maintenance facility while demolition was required before construction could start in Disney’s Hollywood Studios.

I hope I will be able to bring you all of the news of the Disney World opening!

5 – One more attraction to come

Even though Disneyland’s Star Wars: Galaxy’s Edge is now open, the land isn’t complete quite yet! Even when Galaxy’s Edge opens in Disney World, it won’t be complete.

Rise of the Resistance is a highly technical attraction, and it will not be ready for opening in either park. It will open sometime later in 2019, but Disney has not given a date.

What was your favorite part of the Disneyland Galaxy’s Edge opening?