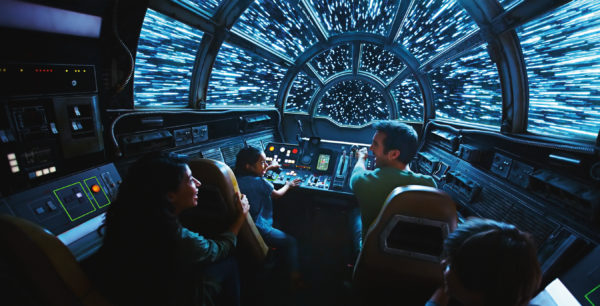 Inside Millennium Falcon: Smugglers Run, Disney guests will take the controls in one of three unique and critical roles aboard the fastest ship in the galaxy when Star Wars: Galaxy's Edge opens in summer 2019 at Disneyland Resort in California, and fall 2019 at Walt Disney World Resort in Florida. (Disney Parks)

Star Wars: Galaxy’s Edge – What We Learned from the Creators

Hours before Star Wars: Galaxy’s Edge even opened I had the opportunity to sit down for a panel discussion at the Main Street Opera House in the Disneyland Park. This was a really cool experience, and I’m so excited to share what I learned with you!

The first thing the panel discussed was the planning behind Star Wars: Galaxy’s Edge, which was first announced in 2015 at the D23 Expo. Disney wanted to create an entirely new place that didn’t exist in any of the films. This allows even those who aren’t particularly strong Star Wars fans to enjoy the new land even if they don’t have much or any knowledge of the films.

Within the land, as we already know, there will be two attractions: Millennium Falcon: Smugglers Run, which will open with the land and Rise of the Resistance, which will open later this year in both Disneyland and Disney World. However, Disney strongly emphasizes that Galaxy’s Edge itself is an attraction in its own right. This will be explained in more detail in the following articles, but it’s worth noting now that the land is virtually a living entity.

The creators say that the central idea behind Galaxy’s Edge is the concept of each guest’s own story. Based on your own perspective and your own actions, every visitor will have a personal experience. Interacting with characters like Storm Troopers, Smugglers, and Siths.

For inspiration, Imagineers visited real locations like Istanbul and other locations in Turkey. The petrified forest in Arizona became the inspiration for Black Spire Outpost. In fact, the creators say that 80 percent of Galaxy’s Edge is modeled after real places, so only 20 percent is added. Interestingly, they say that they also looked at romantic paintings for inspiration, which seems like the opposite of what Galaxy’s Edge is intended to be.

As the land began to take shape, it was important that it looked like it had a history, like it was lived in, which differs greatly from a movie that is limited to the director’s view and is a fabricated storyline. This was accomplished partly by creating layers of infrastructure like wires run to different places over time and patches on the walls. Even the vendors have backstories, and all of the stories come together to create a thick, complex narrative.

While the land itself is a really cool attraction, there are rides within Galaxy’s Edge. Millennium Falcon: Smugglers Run will open in Disneyland on May 31st and in Disney World on August 29th.

From the very start of the planning process, the creators wanted you to be able to get on the ship and not just be a passive observer but to actually control the ship.

The story of the ride picks up after the ship is damaged during The Last Jedi. Chewy has brought the Falcon to the Batuu for repairs and made an agreement with Hondo Ohnaka who wants to use the ship to smuggle goods but also allows Chewie to pick up the parts he needs to repair the Falcon. With all of these extra runs, the pair needs extra flight crews. That’s where you come in.

Smugglers Run is a highly interactive experience. In fact, you will experience changes based on the flight crews’ actions during your mission.

Disney’s Imagineers also say that this attraction allows for flexibility to change missions in the future based on new stories.

Rise of the Resistance

Rise of the Resistance will open in both locations later this year. This ride is very complex, and Disney wanted to get the rest of the land open to satisfy fans and also manage crowds.

During this ride, you will join the resistance to stand up against the First Order. However, you are taken prisoner on a star destroyer, and you come face to face with Kylo Ren. More details will be announced later!

Batuu is a remote trading port, so it seems natural that there would be plenty of merchandise. The hard part is that Star Wars has been around for four generations, so satisfying their desire for specific merchandise requires lots of options! The solution is to approach merchandise in new ways. As I mentioned above, all of the retail locations have backstories, so it’s more than just buying stuff – it’s investing in an experience.

These experiences include working with Gatherers to build your own lightsaber or at the Droid Depot to create a new droid companion.

Doc Ondar’s Den of Antiquities sells lightsaber accessories, the Creature Stall is like a pet shop to adopt your own creature, and you can even buy Star Wars inspired toys from a Toydarian. Interestingly, of the hundreds of products for sale within the land, none of them say “Star Wars.”

Batuu is a planet on the far edge of the galaxy, and there are some shady characters who call Batuu home. One important part of a “hang out” is food!

Oga’s Cantina serves up drinks all day while DJ Rex makes music. The Cantina has something for the whole family- alcoholic and non-alcoholic beverages.

The Milk Stand allows you to finally try blue milk! The creators knew this was an important part of the land, but no one really knew what the drink was, so they started with the story and expanded on it. Blue Bantha milk became a rice and coconut base so It’s accessible to everyone. Green Milk is plant-based, frozen, and refreshing with a light citrus flavor.

Ronto Roaster cooks meat street food, and Docking Bay 7 Food and Cargo serves up familiar flavors in new ways to resonate on every level from kids to adults. They even have vegetarian options. Katsaka Kettle serves one item: a sweet and spicy grain that turns mushroom corn into popcorn.

Coke is the beverage partner for Star Wars: Galaxy’s Edge, and all of the labels are in Arabesh language!

This is the most technologically advanced land that Disney has ever built. One thing that means is that the experience is highly personalized. Your smartphone becomes your data pad through the Play Disney Parks app and you can hack, translate, scan, and tune to make sense of the land around you.

The more you play, the more personal your experience becomes. You can earn a reputation in the app and earn galactic credits. The example that the creators gave is this: If you ride Millennium Falcon: Smugglers Run and damage the ship then head over to the Cantina to order a drink, the bartender might mention that he heard you damaged the Falcon. The entire experience is connected.

Are you going to visit Star Wars: Galaxy’s Edge?