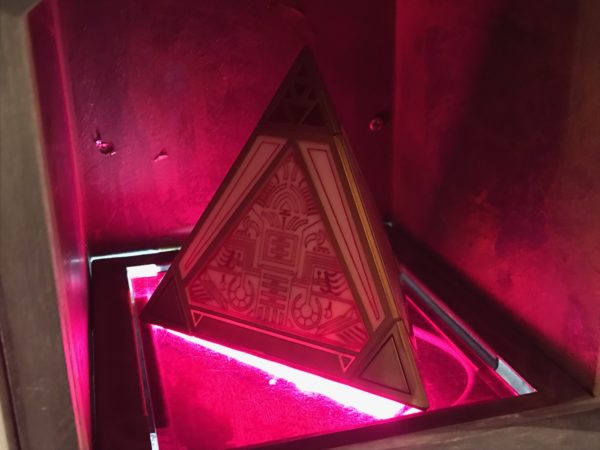 Star Wars: Galaxy’s Edge – The Merchandise of the Land

Part of the fun of visiting any of the Disney Parks is finding the really cool and often unique souvenirs. When those souvenirs are themed for our favorite attractions, it’s even better!

There are some specially-themed for the opening of the new land and others will be here long-term. We also now have a sneak-peak of what we can expect when Galaxy’s Edge opens in Disney World’s Disney’s Hollywood Studios in August!

Let’s take a look at some of the merchandise locations in Star Wars: Galaxy’s Edge!

But first, an overview. There nine different retail locations with nearly 700 unique items for sale.  Wow!

The Droid Depot makes it possible for guests to construct an astromech droid! Choose one of two core models – R-Series or BB-Series then customize your droid with a variety of parts and colors. Disney says there are nearly 280,000 possible combinations for these fun new companions. As pieces and parts roll by on a conveyor belt, you can pick the pieces you want to personalize your droid. You can also purchase additional accessories like personality-affiliation chips and color panels.

Once your droid is built, take it to the activation station, which will allow it to be operated by remote control. Then take your droid out into Star Wars: Galaxy’s Edge with you, and it will interact with elements in the land to enhance your experience and interact with other Bluetooth-enabled devices.

One of the coolest (and most expensive) souvenirs is a custom-made lightsaber.

Savi’s Workshop is home to a group of Gatherers who live and work inside Black Spire Outpost. Inside, you can talk to these interesting characters who have devoted their lives to support The Force by passing down the knowledge of The Force from generation to generation.

Savi, the shop’s namesake, is one of the original Gatherers. At first glance, it looks like the workshop is full of junk, but these pieces and parts are actually memorabilia and artifacts salvaged from all around the galaxy.

These parts are used to create lightsabers, a skill for which the Gatherers are known! To support the Jedi Order, Gatherers have made it their mission to guide others in creating their own lightsabers.

Gatherers (a role for which Disney just hired) welcome you in and tell you a little bit about themselves then lead you to the builder’s table, a large oval table at the center with capacity for 14 builders (at least 5 years of age) plus one guest at a time. The builder will choose a Kyber Crystal, which is fuel for the lightsaber, and a stock. The stocks have different themes including Peace and Justice, Power and Control, Elemental Nature, and Protection and Defense. After choosing a theme, the Gatherer will present you with several pieces that you can use to build your saber. Any unused pieces are returned to inventory, so each lightsaber is unique! Once you choose the pieces, the Gatherer will do the final assembling.

The final result is a 36” lightsaber plus a full-length carrying case. While additional customization items are available for an additional fee, there are more than 120,000 possible combinations with just the pieces available inside Savi’s Workshop.

The whole activity is $199.99 plus tax, and there are no Annual Passholder or Disney Vacation Club discounts. The entire process takes about 20 minutes – so plan to spend a bit of time.

There are some truly iconic characters in the Star Wars movies. If you would like to wield a lightsaber like your favorite character’s, the Gatherers have prepared 10 legacy lightsabers based on these famous characters. They are sold at Dok-Ondar’s Den of Antiquities.

There’s much more inside this cool marketplace, though, including rare and mysterious items inspired by the entire Star Wars saga! You’ll find things like holocrons, ancient Jedi and Sith artifacts, Kyber crystals, and more.

Dok-Ondar’s is an adventure in itself with recesses to explore. Don’t miss Dok-Ondar himself, a large Ithorian audio-animatronic, who sits at his desk checking inventory and bellowing orders to his shop-workers.

The Star Wars saga is known for its cute but capable creatures. The Creature Stall in Black Spire Outpost is run by Bina who is usually out looking for more rare creatures to bring back to her stall. However, she has a team of assistants who keep Bina’s marketplace stocked with these interesting would-be companions.

Some options include the Kowakian Monkey-Lizard, a colorful and rowdy shoulder-sitter, the Porg, a bird-like animal, and the Loth-cat, a small but temperamental animal that can be friendly but can also hunt for prey.

Get your trendy Star Wars-themed apparel and accessories so you can dress like your favorite Star Wars character. You’ll find robes inspired by such characters, tunics, and belts.

This “makeshift” stall has been set up by the Resistance and functions as the Resistance’s hidden command post. Pick up hats, pins, patches, and gear, toys and vehicle replicas, and Meals Ready to Eat (or grab-and-go snacks).

The First Order has just arrived in Black Spire Outpost, and they want you to join them! They’ve set up a temporary storage dock and are selling accessories, toys, and vehicles so you can pledge your loyalty.

The Toydarians are a flying alien species from Phantom Menace. Zabaka the Toydarian is a toymaker who creates handcrafted toys and collectibles and sells them in his stall in the marketplace. Inside, you’ll find plush characters resembling Yoda, Chewbacca, Ewoks and more, games from the movies, and some of the most recognizable vehicles in scaled versions.

Jewels of Bith offers a variety of souvenirs and gifts not only to enjoy your visit to Black Spire Outpost but also to enjoy after you leave. One of the coolest is the Batuuan Cooling Fan is inspired by moisture vaporators of Tatooine. You’ll also find apparel and drinkware depicting images of Batuu.

Which Galaxy’s Edge souvenir is a must-have for you?