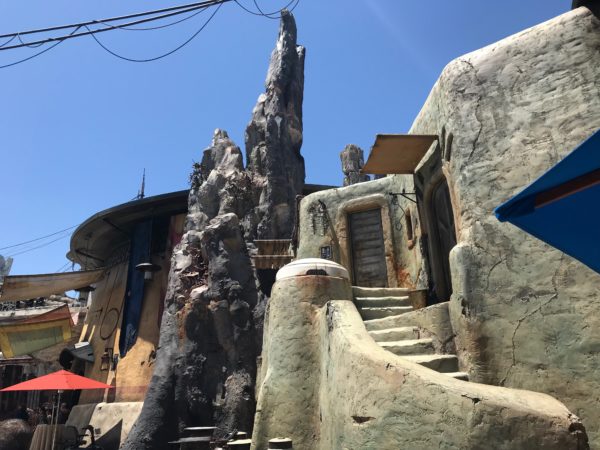 Disney has promised us that Star Wars: Galaxy’s Edge would be the most immersive experience we’ve ever had in a Disney theme park. It’s not just how the land looks, but it’s also the little touches of detail that make you feel like you’ve really traveled to a planet in a galaxy far, far away called Batuu.

All of these little details are really cool, so I wanted to take a chance to tell you about all the little things!

Batuu is brand new from a construction perspective. In Disneyland, Star Wars: Galaxy’s Edge is built on a former backstage area.

But the real world doesn’t exist in Disney parks. In Disney’s story, Batuu has existed for centuries. Because of that, it looks like it has been well lived in. There are wires strung everywhere and control boxes located throughout the land many of which can interact with through the Play Disney Parks app.  The buildings have cracks and potholes.

In Galaxy’s Edge, there are all kinds of creatures in the shops, restaurants, and near the water fountains. Check out the video below to see some of these interesting characters.

Several weeks ago, Disney hired for a the role of Gatherer. These Cast Members’ help guests make lightsabers while sharing their vast “knowledge” of the Jedi Order.

The thing about Star Wars: Galaxy’s Edge is that all of the Cast Members in the land play a role. Even the janitors have costumes and look like they belong in Batuu.

4 –  The Food Matches the Land

Galaxy’s Edge has several restaurants, and while they all of familiar flavors, the presentation is somehow otherwordly as is the naming.

Disney Imagineers make copies of the wheels of Star Wars droids and rolled them into the concrete. This contributes to the “lived in” look.

If you want to purchase merchandise that says “Star Wars” on it, there is plenty available in the rest of the park.

7 – You have to be bilingual

All of the writing except on the exit and bathroom signs is in Aurebesh, the Star Wars language. This makes it a fun challenge to find shops and restaurants since there are no plain English signs.

It will be interesting to see if this remains since it could present complications when large crowds fill the area and can’t find their destinations. For now, it’s exciting and fun!

Imagineers took inspiration from real locations all around the world. The “ancient” spires are inspired by the landscape of Arizona. The tallest spire is 130 feet tall.  The buildings and marketplace take their inspiration from Turkey and Istanbul.

Disney also created more than 7,000 props for the land.

Did Disney hit the park in the theming of Star Wars: Galaxy’s Edge?