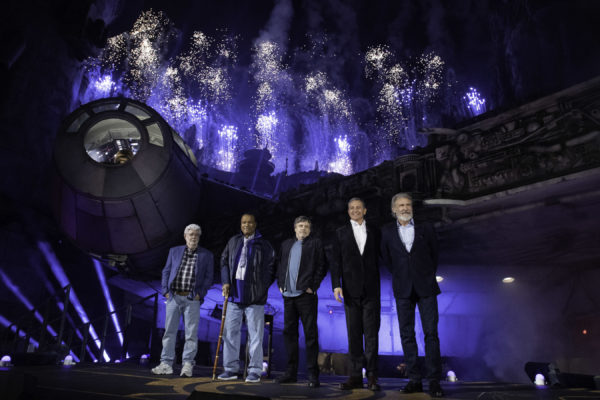 The time has finally come! Disneyland has opened Star Wars: Galaxy’s Edge, and I was there to bring it to you live!

You can also check on the replay of the Star Wars: Galaxy’s Edge Dedication Ceremony on Facebook Live.

Bob Iger, George Lucas, Billy Dee Williams, Mark Hamill, and Harrison Ford were all on hand to celebrate the special occasion, which took place May 29th at 8:30 PM Pacific Time in the Millennium Falcon Courtyard.

Galaxy’s Edge is being called the largest, most technologically advanced single-themed land expansion Disney has ever attempted.

Be The Most Ambitious

Iger started the ceremony by recalling that he told his Imagineers, “do not be ambitious, be the most ambitious you’ve ever been before.” He said they owe it to the fans and to the franchises of two of the most significant visionaries in the industry: Walt Disney and George Lucas.

Iger then introduces Lucas, the creator of Star Wars more than four decades ago. Lucas says he is so happy with how this land has turned out and that it’s like Star Wars on steroids. He notes that it was very hard to create innovative experiences “in the old days”, but now the technology is here. He says, “[Star Wars: Galaxy’s Edge] will change your life!” That sets a pretty high expectation, but it seems like it’s going to be true!

The Stars of Star Wars

Billy Dee Williams, who played Lando Calrissian, was escorted to the stage by his daughter.

Mark Hamill, who played Luke Skywalker, is next. Hamill reminisces that when Star Tours opened, he couldn’t believe that he was part of a movie that would get its own attraction in a theme park. He told himself that he had to savor the moment because it would never happen again. He can’t believe that it is happening again, and Star Wars has its own land! He thanked Disney and George Lucas for “teaching the world a new way to dream.”

Iger then introduces some of the inhabitants of Batuu including Chewbacca who is inside the Millennium Falcon. Something goes wrong though (in classic Disney and Star Wars style), and the ship won’t start. Iger asks if there’s anyone who can fix this thing. Hamill warns Iger not to slight the Falcon reminding him that “this is the ship that made the Kessel run in less than 12 parsecs!” Lando backs him up saying “she’s got it where it counts!”

Harrison Ford, who played Han Solo, takes the stage. He says, “Peter, this ones for you” giving a nod to Peter Mayhew, who played Chewbacca in the Star Wars saga until he passed away last month. Ford hits the ship, and it starts up!

Fireworks soar into the air as the familiar Star Wars music plays.

Disney isn’t done yet, though! Disneyland’s Galaxy’s Edge is open, but the Disney World version doesn’t open until August! Disney says that Star Wars: Galaxy’s Edge will be identical on both coasts with the exception that the Disneyland version will have three entrances while the Disney’s Hollywood Studios version will have only two entrances. That’s significant because everything we’re seeing in Disneyland is a kind of preview of what we will see in Disney World in late August.

Keep in mind that Disneyland requires reservations for Star Wars: Galaxy’s Edge during the first few weeks of opening to manage crowds. Disneyland will open to general admission after June 23rd. Disney’s Hollywood Studios will offer Extra, Extra Magic Hours during the first few weeks, but it doesn’t look like they will require reservations at this time, though capacity will be limited, and the land will likely reach capacity early in the morning.

Did you watch the dedication of Star Wars: Galaxy’s Edge?