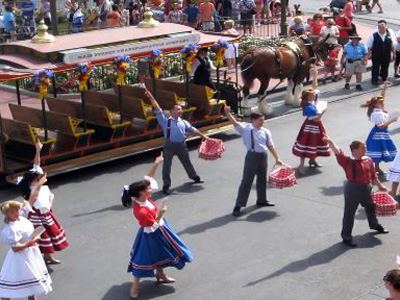 As part of Disney’s Limited Time Magic promotion, the company debuted a new Main Street USA Trolley Show for the summer of 2013. The show started on June 2.

Disney has changed up the show several times recently. Earlier this year there was a spring edition of the Trolley Show that ran from March 3, 2013 – May 12, 2013. That show was also tied into Limited Time Magic.

And before that there was an autumn version of the Trolley Show that came along before Limited Time Magic.

And even before that were older, original versions of the Trolley Show with the classic “I’m walking right down the middle of Main Street USA” theme.

The latest version of the summer show includes a number of different songs. One is a song that goes “Things are going to pop this summer” which is presented in the stops near Cinderella Castle and near the Main Street USA Train Station. I’m not sure if that is a new, original song, but I couldn’t find anything out about it. The stop near the Castle also includes the song “In the Good Old Summer Time“, a song from 1902 written by Ren Shields with music by George Evans.

This first video is the stop on Main Street USA closest to the Castle.

This second video is the stop in front of the Main Street USA Train Station. The show begins with half the performers on the street and the other half upstairs on the train station landing. All the performers then come together onto the street.

I don’t know if it’s just me, but it seems that this version of the show is much more demanding for the show performers with lots of jumping and hopping.

What do you think about the summer edition of the Trolley Show?