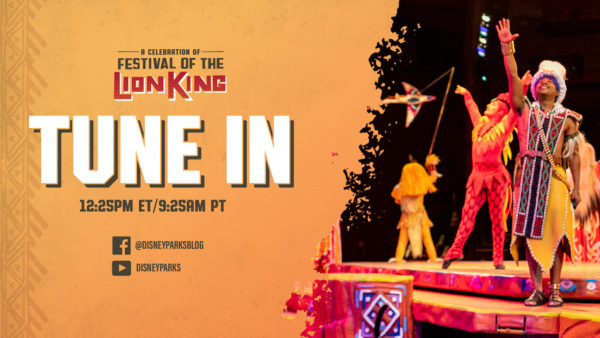 World of Walt recently reported that A Celebration of Festival of the Lion King would be making its return to Disney’s Animal Kingdom Park in May 2021. This news was a major first step in the return of in-park entertainment.

While there have been presentations of the show already, we now know that Festival of the Lion King will make its first public and official showing on May 15. To help welcome back Simba and the gang, Disney Parks has announced that there will be a “one-time live stream” on May 15th at 12:25 pm EST.

Disney Parks is already warning guests of possible long waits due to both demand to see the show and adherence to current COVID-19 procedures. The Disney Parks Blog stated the following:

“Because we are still physical distancing as part of our health and safety measures, the opportunity to view “A Celebration of Festival of the Lion King” during a visit to the park will be very limited. To give more people a chance to enjoy it, a one-time live stream will be available on May 15 at 12:25 p.m. ET right here on the Disney Parks Blog. We invite you to tune in to our first official show and join in the fun!”

Although the Festival of the Lion King will largely remain the same, Disney implemented several changes during previews.

Laurel Slater who writes for the Disney Parks Blog detailed some of the changes in part stating: “One thing to keep in mind is, there have been a few changes to the show since you last saw it. While the majesty and splendor is all there, staging and choreography have been updated with safety protocols in mind for our performers and our guests. We’ve also pared down parts of the show, such as the acrobatics, but the rest of the cast will be sure to dazzle you”.

Will you stream A Celebration of Festival of the Lion King from Disney’s Animal Kingdom?