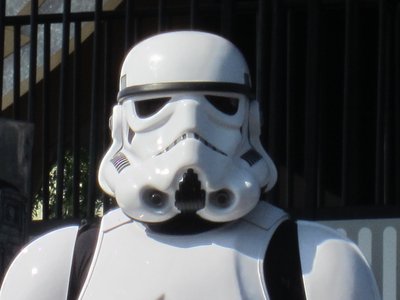 One of the fun things about Star Wars Weekends at Disney’s Hollywood Studios, in my opinion, is the chance to see a side of the Star Wars Characters that isn’t simply about shooting, fighting, and strategizing on how to take over the galaxy.

What is it like for a Storm Trooper in their down time on a security shift? What do they talk about? Do they have a sense of humor?

Now we know the answer.

The Real Life Of A Storm Trooper

In past years, Disney stationed Storm Troopers on the roof of the entrance canopies. This year, things seem a bit different.

Probably expecting huge crowds – which did show up – the park wasn’t scheduled to open until 9:00 but when I arrived at 8:30 Disney was letting people in. Toy Story Mania was open with a 30 minute posted wait but a 10 minute actual wait – although FastPasses were already being distributed for 11:30am.

Since Disney did an unofficial early opening, it probably no longer made sense to have the Storm Troopers at the entrance to entertain the crowds waiting for the opening. People didn’t really have to wait for the gates to open.

So this year the Storm Troopers were not standing above the entrances, but instead were on the main stage by the Sorcerer’s Hat at the end of Hollywood Blvd – in front of The Great Movie Ride.

Two Storm Troopers would stand on guard for several minutes, which allowed for great photo opportunities. Then, the two Troopers would exchange a few lines back and forth – usually very funny.

Here is a video of the Storm Trooper dialog, with most of the silent “standing around just doing guard duty and looking menacing” time removed.

What do you think about this Storm Troopers presentation?