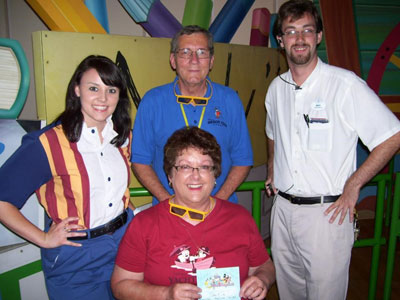 Disney has invested billions of dollars over the years on roads, buildings, shows, and technology that enable people to have amazing vacation experiences.

However, plenty of other entertainment enterprises have also spent huge amounts of money but don’t have the emotional connection with folks that Disney creates. What does Disney do that is so special?

There are many answers to that question.

I think answer one is that Disney creates “magical moments.” I don’t think there is an official definition of a magical moment, but I like to think of it as an encounter with a Disney Cast Member where they go out of their way to make you feel special.

Some magical moments may be very individualized and unique, while others may be something that happens time and time again. Either way, in the end, you feel special.

I’ve heard from lots of folks about their own experiences with magical moments. Let’s take a look at a few:

Joy and her husband, John, are big Toy Story Midway Mania fans. In fact, they went on the ride an unprecedented 22 times in one day! Given how long the lines are, that was an amazing accomplishment. One of the Disney Cast Members at the attraction said that, as best she could tell, it was a record accomplishment.

At the end of the day, all the Cast Members gathered around and gave Joy a special certificate, naming her an “Honorary Toy.” They also took a group picture together after the attraction closed for the day.

Aaron and Gilly are Disney fans, so it was a natural choice for them to spend their honeymoon in Disney World (which is, by the way, the most popular honeymoon destination in the world).

As they were watching a parade in the Magic Kingdom, one of the mice from Cinderella was dancing by and happened to notice that the newlyweds were wearing their “Happily Ever After” buttons. The mouse ran over to Aaron and Gilly, pointed to the buttons, hugged them both, and then motioned for them to hug each other. The happy mouse clapped her hands as they did. She then skipped away, continuing on with the parade.

That Character Performer, as they are called in Disney-speak, didn’t need to make that stop, but she did. In the process, she made Aaron and Gilly feel extra-special.

Jim and his wife took a trip to Disney World back in January, 2012. They booked a tour on the Wild Africa Trek at Disney’s Animal Kingdom. When it was time to take their tour, Jim and his wife found out that no one else had booked the tour that day.

They thought that Disney would cancel the tour, but instead the three Cast Members who conducted the tour made Jim and his wife feel like VIPs. Everything was tailored just for them. They felt like they were living an episode of Lifestyles of the Rich and Famous on a very exclusive safari. They were so impressed that they wrote a letter to Disney to commend the three cast members.

The Disney Cast Members on the Wild Africa Trek didn’t have to give Jim and his wife special treatment, but they did, and in the process, made them feel extra-special.

Check In Mix Up Turns Magical

Joy never thought she would make it out to Disneyland, but she went on a solo trip in 2013 to participate in a runDisney event. She decided to stay on Disney property at the Paradise Pier resort. When she checked in, there was a mix up with her reservation. It took the Disney Cast Member about 20 minutes to fix it. During that wait, the Cast Member asked Joy if this was her first time visiting Paradise Pier. Joy said, “This is my first time to Disneyland!” The Cast Member reached down into a drawer and pulled out a “First Visit” buttons and gave it to Joy. Joy said that small gesture made her shed a tear. Through the confusion of the mixed-up reservation, the Cast Member never lost her composure, and Joy didn’t either. Joy said she will never forget what that Disney Cast Member did for her that day.

The Disney Cast Members at Paradise Peer didn’t have to give Joy that button, but she did, and in the process made Joy feel extra-special.

A while back, I was watching The Festival of the Lion King show at Disney’s Animal Kingdom. The show is wonderful and has definitely earned its reputation as one of the most popular shows on Disney property. In one section of the show, the performers pull some children out of the audience and have them march around the stage.

One of the lucky kids was a girl in a wheelchair. She was having the time of her life. I could see her smile all the way up in the bleachers where I was sitting. Watching that child experience such joy was a magical moment for me.

Magical moments are great, aren’t they? You can read more magical moment stories in the forum. You can leave your own story there or at the bottom of this page.

Have you ever had a Disney magical moment?  What happened?