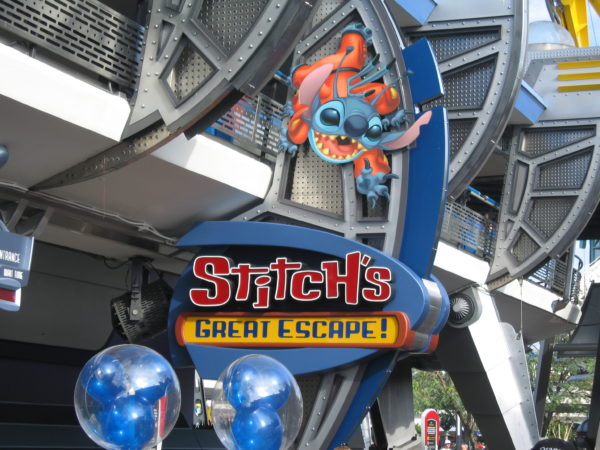 Stitch’s Great Escape in the Magic Kingdom’s Tomorrowland has had a long, and often colorful, history. Multiple sites online have reported the signage for the attraction was recently removed.

Throughout the show, guests would use a number of their senses, much like what see today in Muppet Vision 3D or Mickey’s Philharmagic. With the help of some Disney magic, the show would tap into a guest’s sense of smell (think Journey Into Imagination), vision, sound, and touch (like It’s Tough to be a Bug!).

After a decent run in Tomorrowland, it was announced in 2016 that Stitch’s Great Escape would move from daily operations to seasonal. Typically if a show or attraction is moved to a seasonal operation format, it’s a sign that its days are numbered (with the exception of a few things that truly operate based on seasons and crowd levels).

To the surprise of many guests, the signage for Stitch remained, operations existed, and part of the attraction was turned into a Stitch meet and greet area for over a year. The continued operations of the attraction often left fans scratching their heads as to when the end would be for the show.

In 2018, Stitch’s Great Escape operated for the last time. Even with the end of operations, Walt Disney World’s official site showed that the attraction was only “temporarily closed”, again leaving guests unsure as to what the true status of Stitch was. For all my football fans out there, I called Stitch’s status “Doubtful, unlikely to return to the game”.

Finally, in 2020, Disney announced the attraction was officially closed. Now, we see the first real signs that Disney means what they say with the removal of the giant Stitch that hovers over Tomorrowland.

Were you fan of Stitch’s Great Escape?