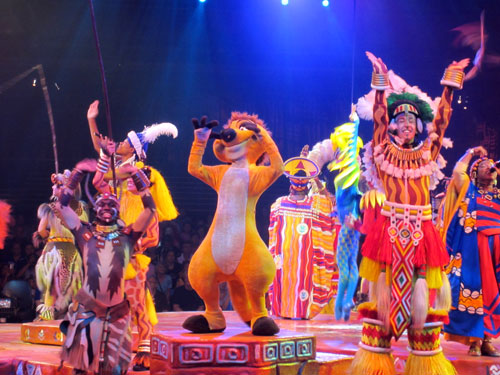 With summer here, the weather is heating up in Florida, and guests are looking for ways to stay cool but still enjoy their Disney World Vacation.

The outside queue lines combined with walking a lot can really take their toll. Fortunately, there are several air-conditioned attractions to help you cool off.

Animal Kingdom is one of the hardest parks in which to stay cool. Many of the attractions have outdoors components.

Animal Kingdom has a few good shows that offer great air-conditioning though! The Festival of the Lion King and Finding Nemo- The Musical tell the classic Disney stories we love. Flights of Wonder is also fun, and although it’s not air-conditioned, it is covered and has benches for you to sit on rest your tired feet. Each of these shows is about 30 minutes long, so you’ll have plenty of time to cool down and rejuvenate.

Most of Animal Kingdom’s attractions are outdoors, but Dinosaur has an indoor line to keep you cool. Although Kali River Rapids is outside (so not air-conditioned), riders will get wet! After the ride, you can even soak each other with squirt guns!

Unlike Animal Kingdom, Magic Kingdom has some great options for staying cool!

Dumbo the Flying Elephant in New Fantasyland is an outdoor attraction, but like other rides Disney has recently constructed, it has an indoor play area for parents and kids to pass the time while they wait for their turn to ride. If the kids are playing away when your buzzer goes off, just let them keep playing and catch the next round. You’ll both enjoy the extra air-conditioning!

Hollywood Studios is another park that makes it difficult to stay cool, but there are a few places to cool off.

The Great Movie Ride is the first place on our list. This slow-moving dark ride is 20 minutes of pure air-conditioned bliss. You’ll even learn some behind the scenes information about your favorite movies. Rock ‘n’ Rollercoaster is a completely different kind of ride. It’s fast, exciting, and record breaking, so it’s not for the faint of heart. However, you won’t faint from the heat because much of this line is indoors. Even the part that is outside is covered, so you won’t be in the direct sunlight.

When it comes to dining, Hollywood Studios actually has a lot to offer even in the midst of the construction. ABC Commissary is a great place to stop. Pick up a salad, sandwich, and some dessert in this Art Deco setting. This isn’t a very busy restaurant and it’s always comfortably cool, so hang out and enjoy the atmosphere for a while! Sci-Fi Dine In Theater is a fun table-service restaurant. You’ll stay cool inside as you sit in your old car and watch a sci-fi movie in a drive in setting.

Epcot is divided into two areas, so we’ll deal with each separately.

The Seas with Nemo and Friends has a fun attraction themed like the popular Finding Nemo movie and a huge tank full of thousands of fish. There are even dolphins and manatees! I could spend hours in this pavilion. You don’t even need to go through the attraction to get to the aquarium.

Next-door is The Land, which has a lot to do! Sunshine Seasons serves up great, fresh food with tons of seating. Living with the Land is a 14-minute boat ride explaining sustainable growing techniques.  Of course, there’s also Soarin‘ which has an indoor queue and is an amazing ride!

Innoventions East and West has attractions that deal with environment and gadgets.

The Universe Of Energy follows Ellen DeGeneres through a dream sequence as she learns about energy. This 45-minute attraction is also air-conditioned with a pretty comfy ride vehicle. You might even be able to squeeze in a nap!

World Showcase involves a lot of walking, but there’s a lot of going in and out of shops, attractions, and restaurants. Mexico‘s Gran Fiesta tour is an eight-minute entertaining boat ride.  The inside of the Mayan pyramid is very cool, and there are several shops in this area. I love hanging out here on very hot days! China, France, and Canada all have movies that average about 15 minutes in length, and The American Adventure‘s Voices of Liberty is also quite entertaining as the actors sing classic American songs.

Where do you go to stay cool in Disney World?