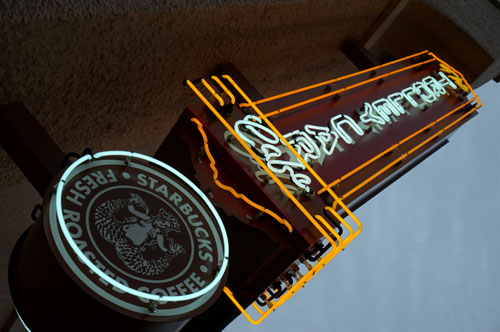 The former L.A. Prop Shop, which sold standard Disney merchandise, is now part of Disney history. In its place, we now have the third Starbucks location inside at Walt Disney World park: the Trolley Car Café. This coffee shop is located on Hollywood Blvd in Disney’s Hollywood Studios, not far from the park’s entrance.

The layout of this Starbucks is similar to the Starbucks locations inside the Magic Kingdom on Main Street USA and Epcot in Future World.

Upon entering the store, the line splits left and right. The pastry case is situated in the middle of the store, between the two lines. If you want to partake of any of the delicious pastries, you pick them up from a Cast Member and take them to the counter where you order and pay for your drink.

As is pretty standard with Starbucks layouts, after you place your order you move down the line to a waiting area where you pick up your drink after a minute or two.

The Trolley Car Café is themed like a trolley engineering shop. There are plenty of switching diagrams, electric transformers, and boxes of supplies to repair the trolley cars. I think the theming is nicely done and fits the golden age of Hollywood.

This Starbucks location serves the same menu and pastry items that you can find in the other two in-park locations.

Let’s take a look inside:

Do you like the new Starbucks inside Disney’s Hollywood Studios?