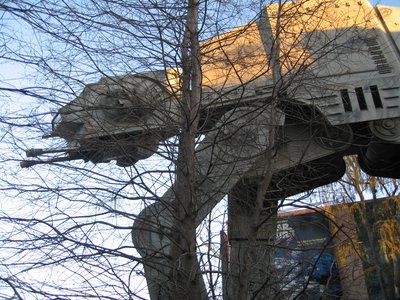 If you are a fan of Star Wars, then the Star Ware Weekends at Disney’s Hollywood Studios are just for you.  And if you are also a Disney fan, than this yearly event is probably the perfect excuse for a trip to Disney World.

While it has been around for a while and operates every day, the Star Wars Weekends are a great excuse to take in the Star Tours attraction.  Star Tours is an ride that puts you in the middle of Star Wars.  Board the Starspeeder 1000 and get ready as your pilot, C3PO, takes you on an adventure.  There are many different versions of the attraction, so each ride is slightly different.  You might travel to Hoth or the Death Star, and you might bump into Darth Vader, Princess Leia, or Yoda.

Disney updated the attraction in 2011 to include improved, digital video in 3D as well as an improved ride simulator system.  As someone whose vision isn’t perfect but who doesn’t generally need to wear glasses for everyday use, I find that many 3D attractions don’t really “pop” off the screen.  However, the technology behind Star Tours is amazing and truly brings the images to life for me and for everyone else I’ve heard rate the experience.

Another ongoing Star Wars show, which takes place on a stage in front of Star Tours, is the Jedi Training Academy.  This is where little Jedis can learn from a trainer before doing battle with Darth Vader himself.   You can see this show several times a day, any day, but Star Wars weekends are a great time to revisit this interactive stage shows – especially if your kids have never seen it.  They are sure to get a kick out of putting on a Jedi robe, getting up in front of the audience, and learning how to use a light saber.

While it sounds corny, and it is, watching a stage show of Star Wars characters dance to rock and roll and pop music is really a blast – if you go in with the right attitude.  This show is offered only during Star Wars weekends and it includes some very talented performers in some very hot and uncomfortable costumes.   The show includes a “dance off” and great music.  Bring a smile, loosen up on being such a stickler for Star Wars authenticity, and have a good time.

If you aren’t into watching Darth Vader shake his booty, then you might be the type who loves to collect Star Wars merchandise.  Star Wars Weekends has plenty.  Much of the merchandise is a mash up of Disney characters and Star War characters – think Donald Duck as Darth Maul. From posters to coffee mugs, from action figures to special edition Disney trading pins, if you like Star Wars stuff, you are sure to find something you will like.  Actually, you will probably find too many things you like.  Plan to pace yourself and stick to your budget – and may the force be with you.