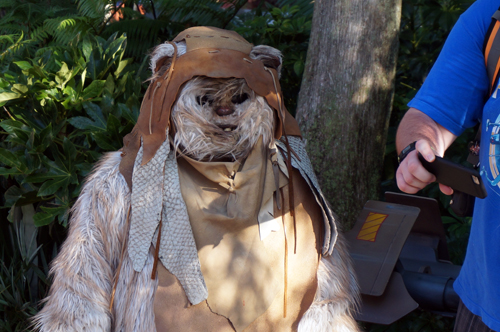 It’s that time of the year again – time for Star Wars Weekends! In 2015 the events take place on Fridays, Saturdays, and Sundays from May 15 – June 14, for a total of five weekends.

What can you expect at Star Wars Weekends 2015?

This year the creative folks in the Disney bakeries are offering three special cupcakes celebrating Darth Vader, Yoda, and Jabba the Hut.

Jedi Mickey’s Star Wars Dine, which takes place in the Hollywood and Vine Restaurant, allows you to meet Disney characters wearing their Star Wars costumes. The price is $57.99 for adults and $34.99 for kids ages 3 to 9.

Star Wars Galactic Dine-In Breakfast, which takes place in the Sci-Fi Dine-In Theater Restaurant, serves breakfast and a chance to meet Greedo, Boba Fett, Drath Vader, Jawa, and Stormtroopers. The big movie screen plays clips from Star Wars movies. The price is a whopping $49.99 for adults and $31.99 for kids from age 3 to 9.

Rebel Hangar: Star Wars Lounge Experience, which is known as the hangout of Rebel pilots, smugglers, and aliens, will offer a variety of options including with extremely cleverly named food such as the Dark Fried (Chicken and Darth Vader waffles), Lightsaber Bites (battered knockwurst sausages), and a Tio of Thermal Detonators (spicy pork wings).

Star Wars characters are everywhere, both as formal meet-and-greets – where you will typically have to wait in a line – as well just wondering around. Characters scheduled to make appearances include Darth Maul (he is really scary looking!), Darth Vader, Ewoks, Stormtroopers, and Queen Amidala among many others.

Many Star Wars celebrities make the trip to Orlando for this special event. Some of the famous folks scheduled to attend at one time or another includes:

While you can see these every day at Disney’s Hollywood Studios, the Star Wars Weekends give Disney a chance to highlight Star Tours: The Adventure Continues as well as the Jedi Training Academy. The Jedi Training Academy actually started with Star Wars Weekends, but is now a daily show. It gives kids a chance to play the role of a Padawan, or Jedi apprentice, and then battle Darth Vader live with a light sabre. When you put kids on stage, you can usually expect something funny – and unexpected!

No special Disney event would be complete without plenty of opportunities to purchase merchandise. This year Disney reorganized the retail experience. Instead of one huge store with a single, long line, there are now three separate (somewhat smaller) stores with two, somewhat shorter lines.

The three stores are:

The Prop Shop: This open-air retail location is always open at Disney’s Hollywood Studios, but during Star Wars Weekends they stock it with Star Wars toys, LEGOs, and clothing. It is easy to walk up and into this store.

X-Wing Collectibles: This store, which is the most out of the way, offers art and collectibles, Vinylmations, a wide variety of Disney trading pins, Star Wars-themed MagicBands, and special merchandise for passholders.

Watto’s Grotto – The store, which is the largest of the three locations and tends to have the longest lines, offers various Star Wars merchandise, including the chance to build-your-own droid and lightsaber, toys, clothing, and personalized Star Wars-themed nametags.

Are you into Star Wars Weekends? Planning to go?