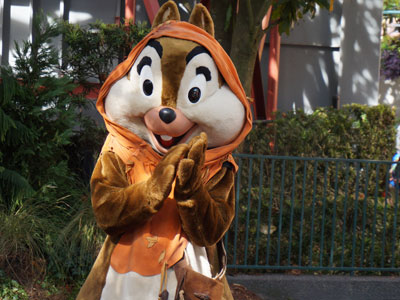 It’s that time of the year again for Star Wars Weekends. For 2014, Disney has added an extra fifth weekend. The fun takes place from May 16 to June 15.

From May 4 to June 15, Disney has added two different character meals with Star Wars characters.

The second Star Wars character meal is a dinner that takes place at the Hollywood & Vine restaurant. At this meal, Disney characters dress up as Star Wars characters. For example, Mickey Mouse wears a brown Jedi robe and Mini Mouse dresses up as Princess Leah. Donald Duck dons his Storm Trooper armor, and Goofy wraps up in a (appropriately goofy) Darth Vader cape and shorts with Mickey images. For kids or anyone who enjoy a lighthearted Disney / Star Wars mash up, this is a fun opportunity.

This year, Disney also debuts a Yoda cupcake, which is topped with a hazelnut buttercream frosting and a white (actually green) chocolate in the shape of Yoda.

These cupcakes are available at a number of locations around Disney’s Hollywood Studios including the ABC Commissary, Starring Roles, and inside Darth’s Mall. In 2014, each cupcake costs $5.19 and is mercifully included in the Disney dining plan.

Throughout the day, you can see characters on stage guarding the Studios.

If you arrive at the studios in time for opening, and you should, Disney will treat you to a fun Storm Trooper Welcome show. In this show, to Storm Troopers exchange fun banter as they carry out their orders to guard the park before allowing guests in.  It is really a lot of fun.

Have you ever wanted to get your picture taken with a Wookie? Are your kids begging for Darth Vader’s autograph? Star Wars Weekends is your opportunity to spend a bit of personal time with Star Wars characters. If you are willing to wait in a line, which can get pretty long, you too can get some great photographs and autographs.

Here are a few examples of the characters you can see and meet:

Legends of the Force Parade

The parade that takes place during Star Wars Weekends is fun. It gives you a great chance to see many Star Wars characters and celebrities. For me, one of the highlights is seeing the 501st Legion of Storm Troopers. This volunteer organization of costume enthusiasts promotes interest in Star Wars and contributes to local communities through charity and volunteer work.

If you have a child who loves Star Wars and whose head is filled with Star Wars knowledge, they can test their trivia skills on the Sorcerer Hat stage. Designed for kids who are 11 and younger, spots for this event go quickly so parents should sign up their children first thing in the morning if they want to participate.

Star Wars celebrities participate in a variety of talk shows so that guests can get behind the scenes information from the people who make Star Wars magic.

Sadly, the famous Hyperspace Hoopla, where Star Wars characters participate in a lighthearted dance off, has faded into Star Wars history. That’s the bad news. However, the good news is that you can enjoy a new fireworks show instead.

Disney knows how to cap off a day of fun with a spectacular evening show. Star Wars Weekends now feature “Symphony in the Stars” Fireworks. The show includes Star Wars music and fireworks together and is presented on Friday and Saturday nights at 9:30 PM.

Many Disney and Star Wars fans clamor for the chance to purchase special Star Wars merchandise. Disney delivers with a temporary store called Darth’s Mall. I will share a complete article about this amazing temporary store later this week, so stay tuned. Plus, I will also offer you a chance to win some very cool limited edition Start Wars / Disney trading pin merchandise for yourself.

Do you like Star Wars weekends?
Leaving your comments below!