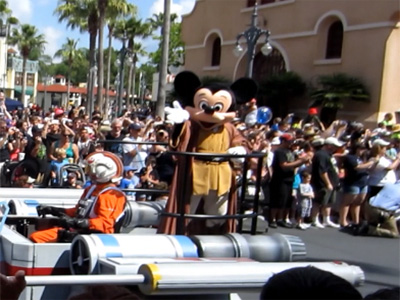 One of the highlights for many folks who attend Star Wars Weekends is the parade that begins near the entrance to Disney’s Hollywood Studios, makes it way down Hollywood Blvd, and ends near the main events stage in front of The Great Movie Ride and the Mickey Mouse Sorcerer’s Hat.

There was a huge turn out from the 501st Legion. What’s that? It is an organization that is not part of Disney or Lucas, but brings together Star Wars fans who have authentic-looking costumes to participate in events – sometimes in exchange for donations to charities. Basically they are fictional unit of Imperial Stormtroopers, complete with fake armor and fake guns. Pretty cool, and they make quite an impression with hundreds of Star Wars characters in full battle gear walking down the street.

What do you think about the Star Wars Weekends parade?