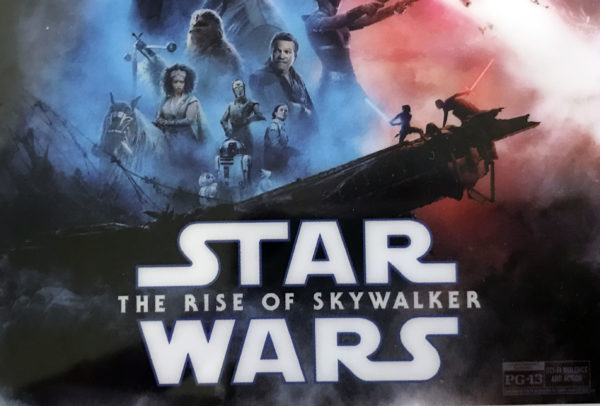 I had an opportunity to see Star Wars: The Rise of Skywalker on its opening night at AMC Theater in Disney Springs.  I also a chance to see the Rise of Skywalker update to the Star Tours attraction in Disney’s Hollywood Studios.  Both were courtesy of the nice folks at Disney Media Relations.

The Rise of Skywalker – Movie

First – no spoilers here.  Read on with good conscience.

What’s the idea behind the movie?  In a paragraph:  Palpatine, emperor of the Galactic Empire (i.e. the super-ultimate bad guy in the Star Wars Universe) has a new plan to take over the galaxy. He is getting ready to launch a navy of Star Destroyers, each of which can destroy a planet. It is the ultimate weapon designed to give him ultimate control.  Ray and the rebel cause need to find a way to take down the Star Destroyers, and they go on an adventure to it make happen.

I think that JJ Abrams, and the entire LucasFilm team, had a difficult job. How do you wrap up 9 movies with dozens of characters created over 40+ years? How do you please die-hard fans who know every backstory element while still entertaining casual moviegoers? How do you merge stories that were created by different people in different eras with different ideas, and wrap a bow on it all?

I know that reviews for this film are all over the map, but personally I enjoyed it very much. It has the elements you would expect in a Star Wars film: amazing locations, battles, ships, humorous moments, surprises, twists, and quirky characters. It also tells a story you can follow and understand with characters you can care about.

For me, I enjoyed the movie. It was a fun romp through the universe, and ultimately provided a satisfying conclusion to a saga that is near and dear to many fans.

I think that many people will enjoy the film, and I give it two thumbs up.

Disney has made an update to the Star Tours attraction in the Echo Lake of Disney’s Hollywood Studios.

I expected a new scene introduced into the existing ride scenes, but instead Disney has created an entire new experience based on the scenes and locations in The Rise of Skywalker.  You get to experience an ocean scene from the movie (complete with giant waves that rock your Star Speeder) as well as take part in an epic battle scene.

It seems that the basic attraction hardware is unchanged. C3P0 is still your captain, and you may still see a rebel spy.  However, the story and visuals on the main cabin screen are all completely new.

For me, this update was a pleasant surprise that surpassed my expectations. It makes Star Tours a brand new attraction, and one worth checking out.

Will you see The Rise of Skywalker – Movie or Star Tours update?