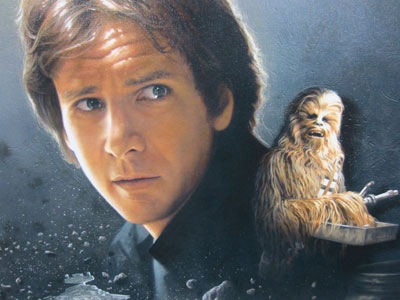 With Star Wars Weekends coming up May 16 – June 15, 2014 at Disney’s Hollywood Studios, there is a big focus on all things in a galaxy far, far away.

Late April was a busy time for Star Wars news. Let’s take a look at some recent announcements:

The initial cast list was announced for Star Wars: Episode VII, and included many actors from earlier movies as well as plenty of new faces. Harrison Ford (Han Solo), Mark Hamill (Luke Skywalker), and Carrie Fisher (Princess Leia) return to the roles they last played over thirty years ago, and Peter Mayhew (Chewbacca), Anthony Daniels (C3P0) and Kenny Baker (R2-D2) will also be reprising their characters. They are joined by John Boyega, Daisy Ridley, Adam Driver, Oscar Isaac, Andy Serkis, Domhnall Gleeson, and Max von Sydow. No roles for these actors have been announced, and it has been hinted that there are more casting announcements to be released.

Shooting for Star Wars: Episode VII is slated to begin within the month and will take place in England and Abu Dhabi. J.J. Abrams (Star Trek) is directing and wrote the screenplay with Lawrence Kasdan, who wrote Empire Strikes Back and Return Of The Jedi (as well as Raiders Of The Lost Ark). John Williams, the composer of the iconic music from all of the previous films, will be returning as well.

In other big Star Wars news, a press release by Lucasfilm President Kathleen Kennedy laid out some future plans for the franchise as well as stated what will and will not be considered “canon” going forward (meaning what is actually part of the “official” Star Wars storyline). Over the years quite a bit of additional content known as the Expanded Universe has been added to the Star Wars universe in books, comics, and video games. Though George Lucas initially stated that he considered it a parallel timeline to his own, fans have still generally considered it all part of one world.

With this recent announcement, though, only the movies, the Clone Wars animated TV show and the upcoming Rebels, as well as any future books, comics, or games released by Disney/Lucasfilm will be considered official canon. All of the previously released Expanded Universe content will continue to be distributed under a new “Star Wars Legends” heading, though it has been stated that some of the ideas, characters, and settings from the Expanded universe will make it into future projects.

“We have an unprecedented slate of new Star Wars entertainment on the horizon. We’re set to bring Star Wars back to the big screen, and continue the adventure through games, books, comics, and new formats that are just emerging. This future of interconnected storytelling will allow fans to explore this galaxy in deeper ways than ever before.”
– Kathleen Kennedy

In the same press release, Kennedy announced a collaboration with Del Rey Books to publish new Star Wars novels. She also announced that the first of these new novels, written by John Jackson Miller, will act as a prequel to the upcoming Rebels television show.

It is unclear if future Expanded Universe stories (outside of what Disney releases) will be released at all, and if they would fall under the Star Wars Legends banner if they are released.

The Star Wars: Rebels animated show will be debuting on Disney XD in Fall 2014, and Star Wars: Episode VII is scheduled to hit theaters on December 18, 2015.

Are you looking forward to Star Wars Episode VII?