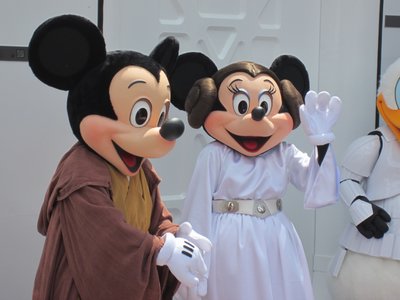 The Studios Celebrates May The 4th Be With You (Photos, Video)

The full-fledged Star Wars Weekends won’t come to Disney’s Hollywood Studios in 2013 until May 17 through June 9, but Disney just couldn’t resists putting on a preview on May 4th (May the fourth be with you!).

The park was very crowded for this one-day event, which was part of Limited Time Magic. By the end of the day I’m pretty sure the parking lot was full.

Here are some of the special happenings that look place:

There were several locations set up where people could wait in line to see Star Wars characters, including Mickey Mouse, Minnie Mouse, Donald, and Goofy dressed up in their finest Star Wars costumes, as well as Darth Vader. These locations seemed to have waits that ranged from one to two hours.

Darth Vader was his usual menacing self. When one guest tried to stand on a step so he would be taller than Vader, the Lord of the Dark side would have nothing of it and walked away.

In other places, lesser known but fun Star Wars Characters wandered the streets where people could easily approach them for photos and autographs.

The Storm Troopers seemed to be having a great time. When a little kid brought up a Duffy the Disney bear dressed as Darth Vader, they changed their poses from weapons up (ready to fight) to weapons across the chest at attention (honoring their leader).

Disney set up a huge stage in front of the Sorcerer’s Hat where DJ Lobot was spinning techno tunes. It was a loud and fun environment, and Star Wars characters mingled with the crowd. In the distance I saw Chewbacca busting some groovy moves.

Disney also offered something they do only very rarely at the Studios – the Symphony in the Stars Fireworks Spectacular show. The seven minute show was set to Star Wars music with a finale so explosive you could feel the vibrations in your chest. Wow!

What do you think about the May The 4th Star Wars weekend?