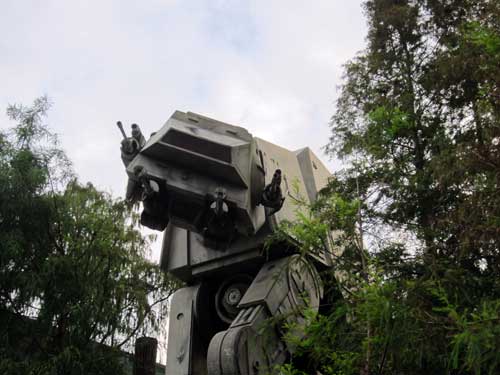 Star Wars Lands in Disney’s Parks: Things They Are A Changin’

By now it’s old news: both Disney’s Hollywood Studios in Walt Disney World and Disneyland Park will be getting all-new Star Wars Lands sometime in the future.

I was in attendance at the D23 Expo in Anaheim, CA when the announcement was made in August, and the buzz on the Expo floor was electric! Disney fans were really, really excited! Disney’s purchase of Lucasfilm in 2012 had come full circle, Disney was getting ready to release the biggest movie of all time, Star Wars: The Force Awakens, and the theme parks were finally getting the BIG Star Wars additions that park-goers had been clamoring for for years.

Of course, with any big change comes big controversy, and the new Star Wars Lands have not been without that.

Let’s take a look at the Star Wars Lands in Disney’s Parks: Things They Are A Changin’.

A Star Wars-themed land in Hollywood Studios seems like an absolutely perfect fit: Star Wars Weekends have been held there for years, The Jedi Training Academy has been initiating young Jedi for quite a while, and Star Tours, The Ewok Village, and a full size AT-AT hold down some pretty prime real estate in the park.

Unfortunately though, with the addition of Star Wars Land, some once popular attractions and venues are being shuttered for good. The Magic of Disney Animation has already been shut down to make room for Star Wars Launch Bay, The Osborne Festival of Dancing Lights had it’s last showing, the Backlot Studio Tour and Catastrophe Canyon are long gone, and honestly not all Disney park-goers are very happy about it.

In my opinion, the Disney theme parks were never meant to be museums where guests could relive their childhoods. I’m not always happy when attractions I’ve loved for years are replaced but I trust the folks over at Walt Disney Imagineering to give us Disney fans new, amazing experiences that will keep us entertained for years to come.

Will I miss certain things that have gone away or will be going away? Of course! Will I be thinking about them while I’m piloting the Millennium Falcon through space? In the timeless words of Kevin McAllister from Home Alone, “I don’t think so!”

Now, admittedly, Disneyland is a little different when it comes to changes. It is much more of a “local” park and is often filled with California residents. People in Southern California have grown up with Disneyland and honestly the park hasn’t changed an awful lot in the last 20 years or so.

That is about to change.  Star Wars Land is going to change quite a bit of the Disneyland Park. Locals and Disneyland purists alike believe that a land themed around one film franchise has no business in the timeless, classic Disneyland Park. I have to admit, even I was a bit taken aback when I found out that this new land wasn’t being built over at Disney’s California Adventure. Will the new land take away from the intimate, nostalgic feeling of Disneyland? I guess only time will tell.

What is known already, however, is that a Star Wars Cantina will be built in the Star Wars Lands in both Hollywood Studios and Disneyland. This has been a bit of a hot topic for debating Disney fans over the last few months. When the cantina opens in Disneyland, should alcohol be served? There won’t be a controversy in Florida since now all four parks serve alcohol at certain points in the day. But Disneyland has held firm (except for Club 33) in not selling alcohol anywhere in Disneyland Park.

In my opinion, Disneyland has to budge just a little bit and allow alcohol to be served with dinner at the new Star Wars Cantina, much like the Magic Kingdom’s Be Our Guest restaurant does. I’ve never once seen a rowdy, drunken crowd stumbling out of Be Our Guest and I’d imagine the same would hold true with the new cantina.

Walt Disney did not want alcohol in his park in the 1950’s and 1960’s, but was far from a teetotaler himself and I think he would have moved along with the times if he had been around when the parks that do serve alcohol were built.

So what do you think? Were you upset that Star Wars is taking over a large portion of Disney’s Hollywood Studios? Should alcohol be allowed to be served in Disneyland’s Star Wars Cantina?

I know one thing, these are debates that will be on Disney fans’ minds until we all get that first walkthrough of the new Star Wars Lands in a galaxy (hopefully not) far, far away!

Are you looking forward to Star Wars in Disney World and Disneyland?