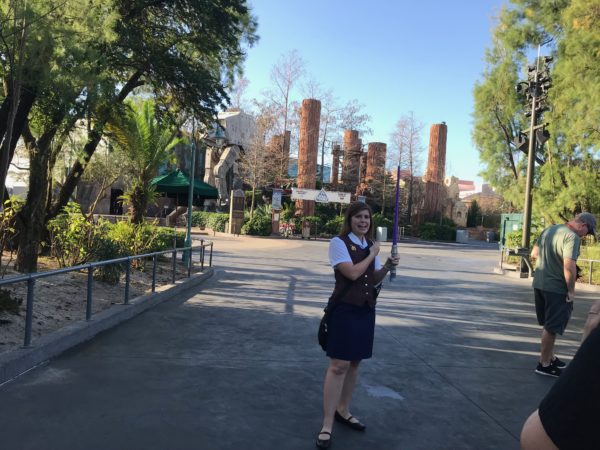 Star Wars Guided Tour at Hollywood Studios: What Is It, and Is It Worth It?

Star Wars is not new to Disney’s Hollywood Studios. Star Tours opened in the park on December 15, 1989, just months after the park opened. Star Wars Weekends took place for many years in the park and were extremely popular. However, when Disney acquired Lucasfilm in 2012, things started to move to the next level: work on Star Wars: Galaxy’s Edge began in 2016.

Tour Covers All Things Star Wars at the Studios

The Star Wars Guided Tour, which we’ll be talking about today, started about two years ago. This is one of many backstage tours, and I had the chance to experience this one courtesy of the nice folks at Disney Media Relations.

The tour is $99 for regular guests and $84.15 for Annual Passholders and Disney Vacation Club Members. The tour is available Monday through Saturday and includes lunch and a reserved spot for fireworks viewing.

When you check in for your tour, the Tour Guide-Cast Member will give you an earpiece, which will allow you to hear the Tour Guide speak regardless of how far away you are as long – as you’re in range. The tour guide always asks that you test your audio, and they always carry extra batteries and headsets just in case any malfunction. They also suggest that you visit the restroom before the tour starts so you don’t disrupt the flow of the tour.

Are you ready? Let’s get started!

The tour begins with a ride on the Star Tours attraction, which is a 3D simulator ride.

Trivia: When the park first opened, the overarching theme of the Disney MGM Studios was that of a movie set. This attraction fit that theme. One place you can recognize this is in the AT-ATs, which are only finished on three sides. Since move set designers only finish what the camera sees, this is authentic to the theme.

Tour Bonus: The Tour Guide brought the group onto the attraction with no wait.  They also provided a “backstage moment” where we saw the entrance ramps to the simulator with the lights on.  Usually this area is dark. We weren’t allowed to take pictures, but it was pretty cool to see the large open room that holds the simulator cabin and allows for big movements. This ramp bridge folds up against the wall of the vehicle after boarding.

Trivia: The tour guide told us that safety cameras take a picture of the simulator’s ramp bridges at the beginning of each day and before each ride. A computer checks the photos.  If the photos aren’t the same, the ride won’t start.

Trivia: Star Tours has the ability to run 200 simulations, which are randomly selected. However, they are all time-locked, so the sequencing of events in your particular simulator makes sense.  You won’t see Darth Vader in one scene and BB8 in the next, since they are from different time period.

Tour Guide says – No shopping in the gift shop!  This is to keep the tour on its timeline.  Where else do you hear that at Disney World? 😊

Star Wars Path of the Jedi

Star Wars Path of the Jedi is a short film that tells the story of the Jedi Order’s epic fall and its thrilling return. All ages are welcome in the show, but it is dark and might be scary for very young children. This show operates seasonally, but it is included in the tour regardless of the time of year.

Tour Bonus: The group was able to see the Star Wars Path of the Jedi presentation even though it wasn’t available to park guests the day of the tour.

Trivia: Over time, the storylines from comic books and animated films in the Star Wars universe started to contradict.  Disney asked Lucasfilm Story Group to sort out the stories and keep them story consistent.  They created “canon” (official stories) as the main films episodes 1-8 plus Clone Wars, and everything after April 2018.

Tour Guide says – No playing X Box games in the Game Port on way out!

Star Wars Launch Bay opened in December 2015 just months after the new Star Wars land was announced at the D23 Expo. At this point, even though Disney officially owned the rights to the franchise, George Lucas still consulted on the look and feel of the attraction.

Trivia: The Star Wars universe brings to life a decades-long saga.  Lucas wanted it to be as realistic as possible. Part of making Star Wars authentic was making it look lived in, so in the movies you will see junk piled in the corners.  In the same way, the Star Wars Launch Bay sign in Disney’s Hollywood Studios was built to look old and dirty.

During this part of the tour, we separated into smaller groups according to the planet listed on the back of our lanyards, and we got to meet BB8, Chewbacca, and Kylo Ren.

Tour Bonus: The group didn’t have to wait in line for these three meet and greet experiences.  As usual, PhotoPass photographers were on hand, but the guides kept the process moving by taking photos using the participant’s personal phones and holding items like purses, backpacks, etc.

Next on the tour was a visit to the Launch Bay Theater where we saw a movie called Meet the Makers. This film was all about the people who create the Star Wars movies and how they bring the film to life.

Trivia: On the back of your tour lanyard is a translator for the Star Wars alphabet, called “Aurebesh.”  If you translate Aurebesh letters one by one, you will get the English words.  On the movie screen, the translated Aurebesh beneath the “Launch Bay” text reads “Walt Disney World”.

The gallery tour shows off many pieces the memorabilia, some on loan from LucasFilm.  Some of the pieces were actually used in the Star Wars films.

Trivia: As LucasFilm creates movies, they still to this day create models of ships and people as a reference.  However, unlike the old days, these models don’t actually make it into the films. Instead, the visual effects are now done with computer animation.

At this point, we stopped for a quick bathroom break and got to see the characters parade by.

Then we walked to the front of the park, passing by the Hollywood Brown Derby restaurant along the way.

Trivia: When Star Tours – The Adventure Continues opened, George Lucas came to visit The Studios. Bob Iger, CEO of the Walt Disney Company, invited him to breakfast at The Brown Derby restaurant.  It is where Iger first offered to buy Lucasfilm. It took a year, but Lucas finally agreed.  Normally, the Hollywood Brown Derby isn’t open for breakfast, but if Mr. Lucas and Mr. Iger want to eat there, it will open up for them!

March of the First Order

Next, we were treated to a unique view of the March of the First Order parade.

Tour Bonus:  The tour group got to follow behind the Storm Troopers and march down Hollywood Blvd.  It was like being a part of the parade!

Since we had followed the troopers down Hollywood Blvd, it made sense to watch them during their stage presentation.

Tour Bonus:  The Tour Guide led the group to a reserved, up-front viewing area for the Storm Trooper presentation.

Lunch at Backlot Express is included in the tour. I had the Southwest Chicken Salad, and we all got lightsaber churros for dessert!

Tour Bonus:  We received churros that looked like lightsabres.  Fun!

Tour Bonus: During lunch, we were visited by a Storm Trooper who took photos with each of the guests. While this is usually part of the tour, it is weather permitting and is not advertised. During inclement weather, the characters can’t travel through the park to the restaurant.  This was a very nice touch – like a character dining event.

Our next stop was Walt Disney Presents, a space with displays about Walt Disney, Disney history, and revolving presentations of what is new with the company.

Here we viewed the partial model of the new Star Wars: Galaxy’s Edge land that will open in Disneyland and Disney’s Hollywood Studios later this year.

The Millennium Falcon attraction will have 200 fully-functioning buttons. This ride will put you in the driver’s seat with a mission to complete. Can you complete the mission? It is actually possible to fail.

The Rise of the Resistance attraction will put you right in the middle of a battle between good and evil.

Star Wars: A Galaxy Far, Far Away is a live stage show.

Tour Bonus: We were treated to reserved seating right in the front – no waiting and great view.

Trivia: When building the Chinese Theater, Disney asked Grauman for their blueprints when the theater was being built. Later, a fire in California damaged the original theater, and the original blueprints were lost. Fortunately, Disney had a copy, so Grauman asked Disney for the copy of the blueprints so they could restore the theater. Talk about art imitating life then life imitating art!

Trivia: A Skywalker Sound employee came to Disney’s Hollywood Studios for a vacation with his family. He heard the sound of the Rock ‘n’ Roller Coaster taking off and was fascinated by the noises.  He later came back to Hollywood Studios with all his recording equipment and capture the sounds of the coaster.  That sound of the coaster taking off is in the Star Wars movie Force Awakens, but we don’t know where.

The formal part of the tour ended here, but those with young children still had another event – the Jedi Training Academy.

Jedi Training allows children the opportunity to train in the ways of the Force and test their skills against the Dark Side. They even get to play with real lightsabers! This event used to only be offered during Star Wars Weekends, but it now occurs daily.

Tour Bonus: Kids on the tour are guaranteed a spot in the Jedi Training Academy, one that is very coveted and can be hard to get on your own.

Trivia: During the Jedi Training, on-lookers see characters on stage from different times in the movie. How does this make sense?  The characters are just “visions” in the temple and not actually there.

What is Worth It?

You may have noticed that most of the stops on the tour included things that you could do yourself using standard admission to the park.

Tour Guides:  The guides are friendly and take you to each spot.  They answer questions and provide trivia along the way.  I learned a lot about Star Wars.

No waiting: You don’t have to wait at all for any of the attractions:  Star Tours, movies, meet and greets.  This will likely save you many hours of waiting.

Lunch:  Food is provided, and so is a visit with a Storm Trooper.

Front row viewing: You are right up front, without waiting, for the Storm Trooper stage show, the Star Wars: A Galaxy, Far, Far Away stage show, the Galactic Spectacular fireworks show.  You don’t have to arrive extra early to get a good spot – you get the best spot possible with no waiting at all.

Parade:  You get to march down Hollywood Blvd with the Storm Troopers – almost like you are in a Disney parade!

Backstage peek:  There was only one backstage moment – seeing the lights on for the Star Tours simulator loading area – but it was a good one!

Gifts: You get a Darth Vader mug and name tag, which are fun.

Is it worth the cost?

Given all the bonuses along the way, if you are a Star Wars fan of any type, I think you will find the tour to be a pretty good deal and a lot of fun.

Have you taken the Star Wars Guided Tour at the Studios?  Interested?