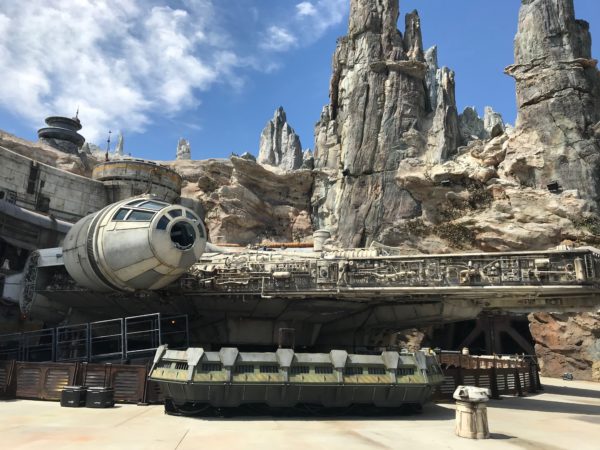 I spent last week visiting Disneyland’s version of Star Wars: Galaxy’s Edge. While there was plenty of information available before the opening, we got to know so much more when the land actually opened.

The really cool thing about this is that the Disney World version is said to be identical with the exception that Disney World will have two entrances where Disneyland has three.

Today I thought we’d take a look at a Galaxy’s Edge 101 including attractions, food, merchandise and more!

Before Star Wars: Galaxy’s Edge even opened to the media, Disneyland held a panel discussion with the creators including Portfolio Creative Executive Scott Trowbridge for Walt Disney Imagineering, the design and production division for Disney Parks, Experiences, and Products. They answered some interesting questions and provided some previously unknown details and insights into Disney’s approach to Star Wars.

Get the details here: Star Wars: Galaxy’s Edge – What We Learned from the Creators.

Star Wars: Galaxy’s Edge allows you to pilot the “fastest hunk of junk in the galaxy”, the Millennium Falcon! Millennium Falcon: Smugglers Run follows a story that Hondo Ohnaka is using the Falcon to smuggle goods into Black Spire Outpost for his own good and to help Chewie get the parts he needs to fix the broken ship. Can you help them?

Rise of the Resistance will be the second attraction in the land, but it will not open in either location until later this year.

The food of Star Wars: Galaxy’s Edge is otherworldly in its appearance and naming, but it somehow still provides familiar flavors. Plus, if you’ve been dying to try the famous Blue Bantha Milk, you finally can!

Get the details here: Star Wars: Galaxy’s Edge – The Food of the Land.

Would you like to customize your own lightsaber? How about creating a new droid companion or adopting a creature as a new friend? You can do all that and more in Galaxy’s Edge. Savi’s Workshop and the Droid Depot are the interactive merchandise locations of the land, and there are also a variety of more traditional stores like Dok-Ondar’s Den of Antiquities, Creature Stall, Black Spire Outfitters, Resistance Supply, First Order Cargo, Toyarian Toymaker, and Jewels of Bith. Make no mistake, though: these stores are far from typical souvenir shops.

Imagineers really outdid themselves on this one. It’s unlike anything we’ve ever seen before from Disney or really anywhere else. Most notably, the land looks lived in – like it’s centuries-old though it was completed just weeks ago.

Galaxy’s Edge was designed to fully interact with the Play Disney Parks app. You can intercept radio transmissions, hack door panels, translate alien languages, and more when your smartphone becomes you own personal datapad. There are also games you can play.

Music is a big part of every area in Disney Parks, but perhaps even more important in Star Wars: Galaxy’s Edge. This is especially noticeable in Oga’s Cantina, where you will hear some familiar Star Wars tunes plus some new notes. I got to interview the head of music for Disneyland!

Get the details here: Star Wars: Galaxy’s Edge – Creating the Music for the New Land.