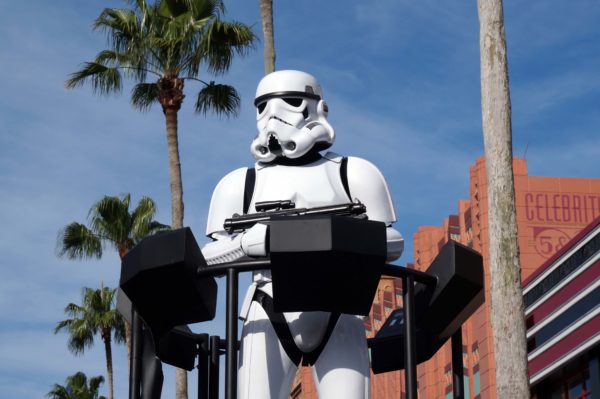 But Star Wars isn’t new to the Studios. Star Tours opened in 1987 and has been a popular attraction ever since. Star Wars Weekends was also a huge draw for fans of the saga.

This hard ticketed event takes place during Star Wars weekends and is scheduled for April 14th from 7pm to midnight. It’s a family friendly, and you’ll be celebrating the 40th anniversary of Star Wars.

The event is like a movie premier experience. You’ll walk the red carpet towards an intergalactic experience full of entertainment including a park-wide scavenger hunt and character meet and greets. Some of your favorite attractions will be open too! Since it’s a separately ticketed event, the crowds will be smaller than during regular hours, so you’ll be able to see and do more in less time (i.e. the wait times won’t be too long!).

Guests are allowed and even encouraged to dress up as their favorite Star Wars characters, but there are some rules. For kids 13 and under, the only limitation is no full-face masks; cast members must be able to see your eyes. Adults 14 and older are discouraged from wearing layered costumes, and if you do you may be subject to extra security searches. Adults cannot wear anything full length including capes, and you can’t carry or wear anything that resembles or could be used as a weapon. Adults are not allowed to wear masks of any kind, but you can wear transparent wings and tutus and use plastic light sabers and toy swords.

I imagine this will be a lot like Mickey’s Not So Scary Halloween Party and Mickey’s Very Merry Christmas Party in Magic Kingdom, and if it’s successful, you can bet that Disney will bring it back in the future!

If Star Wars Galactic Nights seems like a fun time to you, you can join the experience for $129 plus tax.