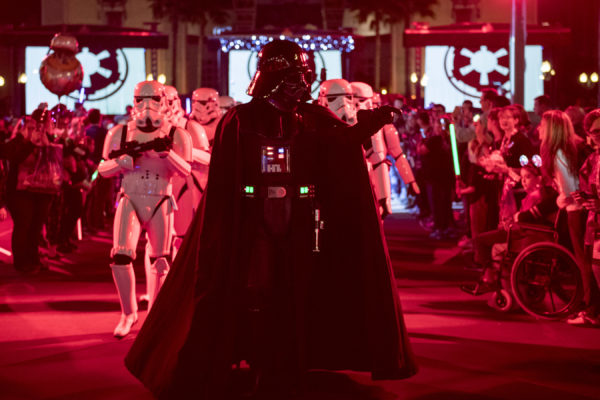 Get your light sabers ready! The next edition of Star Wars: Galactic Nights is scheduled for May 27th, 2018, and tickets are on sale now!

This special and exclusive event started at Disney’s Hollywood Studios just three years ago and has only been held as many times. Galactic Nights celebrates the entire Star Wars saga with exclusive entertainment, character meet and greets, photo ops, event merchandise, food and drink, and much more.

Unlike Disney’s other hard-ticket events, Galactic Nights is held for one night only; with a limited number of tickets available, the event has been known to sell out.

Let’s take a look at what you can expect this year!

This year, there will be a panel discussion with the creators of Star Wars: Galaxy’s Edge. This new land in Hollywood Studios is scheduled to open in 2019, and very few details have been released so far. However, this panel discussion will shed some light on all things Star Wars.

The Hollywood Tower Hotel, home to the Twilight Zone Tower of Terror, will be the backdrop for event-exclusive projections. There will be images from the Star Wars Galaxy with favorite film moments mixed in set to special effects and lighting and the famous cinematic score.

Star Wars: Galactic Nights is an after-hours event. The park will close early to regular admission guests, and event guests will have exclusive access to all event activities from 7pm to midnight. There will also be other select attractions open during the event, so you’ll enjoy lighter crowds at some of your other favorite Hollywood Studios attractions.

If you’d like to attend this event, tickets are on sale now. Adult tickets are $129, and kids’ tickets for ages 3 to 9 are $114. Don’t forget to ask about discounts for Annual Passholders and Disney Vacation Club Members.