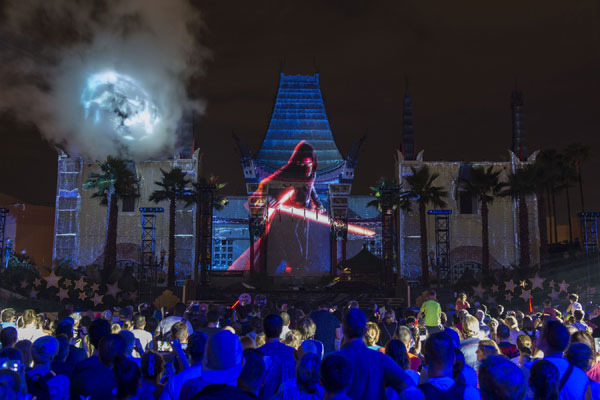 The sell-out event last April is back by popular demand!

Star Wars: Galactic Nights is a must for any Star Wars fan, and Disney will hold another event with even more to do on December 16th from 7pm to midnight.

Let’s take a look at what you can expect at this event.

There will be a ton of entertainment options during the Star Wars: Galactic Nights, some carried over from last year and some new. All of it will celebrate the wonder that is Star Wars.

There will be other character encounters too with the cute Ewoks, the intimidating AWR Troopers, and the roaming droids. There will even be Jedi Knights ready to train young Jedis in Jedi Training: Trials of the Temple.

PhotoPass photographers will be stationed at locations with special backdrops including one inspired by Star Wars Rebels. All over the park, you’ll find scenes from the films that are both immersive and iconic, and great photo ops.

Stop by the Epic Theater to hear Imagineers discuss the 14-acre expansion project taking place at Disneyland and Disney’s Hollywood Studios. Star Wars: Galaxy’s Edge is scheduled to open in 2019.  This alone may be worth the price of admission, depending on what type of inside tips you might learn.

Finally, dance the night away as a DJ spins some tunes at the Star Wars Dance Party. Disney encourages guests to come dressed in costume making this party feel like a totally immersive experience.

What would a Star Wars night be without some Star Wars attractions?

Star Wars Launch Bay will be open, and you never know what or who you might find inside!

Star Tours will be open with little to no wait time, and Star Wars: A Galaxy Far, Far Away complete with fireworks and high-tech projections on the Chinese Theater will also show at night.

If this sounds like something you can’t miss, here’s what you need to know about tickets.

This is a hard-ticket event meaning that it is exclusively available to guests who purchase an extra ticket. No regular admission guests will be permitted in the park during this party. Tickets are $129 for adults and $124 for kids ages 3 to 9. Annual Passholders and Disney Vacation Club members will get a discount.

Call 407-WDW-PLAY to purchase tickets and sign up for the special Galactic Tasting Sampler, which includes light saber churros and a charcuterie with C3PO crackers!

Book early because this event sold out when Disney held it in April, 2016. Star planning your costume now!