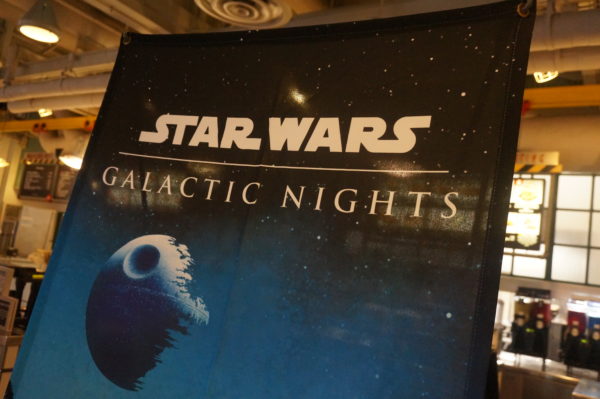 Star Wars Galactic Nights is coming to Disney’s Hollywood Studios one night only – December 16, 2017 from 7pm to midnight.

This is a a hard ticketed event, meaning that you need to purchase a separate ticket for admission.  Just like with Mickey’s Very Merry Christmas Party or Mickey’s Not So Scary Halloween Party, your run-of-the-mill theme park entry ticket or annual pass won’t get you in to this even.

David Collins, a voice actor and technician who is well know in Star Wars circles, will also attend.

Warwick Davis, who has appeared in several Star Wars movies, will host the event.

Perhaps most exciting for fans of Disney Parks, there will be an appearance by Scott Trowbridge, a Studio Leader at Walt Disney Imagineering.  Towbridge will be part of a panel discussion on the current efforts to build the new Star Wars: Galactic Edge land at both the Studios and Disneyland.   The discussion will take place four times during the night in the Epic Theater.

Disney will present a one-night projection show on the Tower of Terror that will highlight all kinds of destinations from across the entire Star Wars saga, likely including some images of the latest installment, Star Wars 8: The Last Jedi.

Throughout the park Disney will set up photo locations.  As you visit each one, you can collect stickers.  Get your photo taken with a full size Rancor or K2S0.

Disney’s Hollywood Studios already offers several changes to get your photo taken with Star Wars characters, but the event will offer many more, including Ewoks and Darth Vader.

Disney will allow guests to dress up in costume during this event.

Since admission will be limited, you can expect shorter wait times for all the attractions in the Studios, including Toy Story Mania and the Rock ‘N’ Roller Coaster.

Special events call for special food, and Disney chefs have created many delicious offerings.  I had a chance to check them out.  Here is what you can expect:

If all goes as planned, I hope to attend the event and share some Facebook Live broadcasts – assuming the technology cooperates.