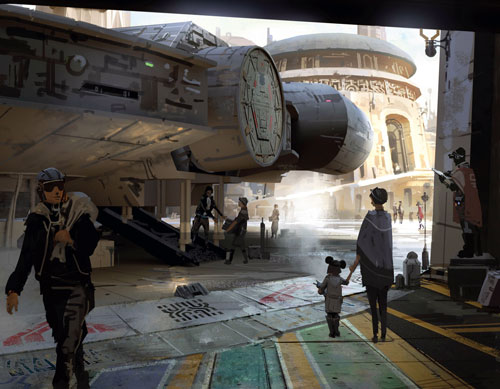 On Sunday, February 21st, 2016, Disneyland celebrated its 60th anniversary with a two-hour star-studded television special with Derek Hough, from Dancing With The Stars, as the Master of Ceremonies.

The show celebrated all things Disney, but also gave us some great peaks at the upcoming Star Wars Land.

This is not the first time that Disney has celebrated, though. For the 10th Anniversary, “Walt Disney’s Wonderful World of Color” featured Walt himself showing plans for upcoming attractions including It’s a Small World, Pirates Of The Caribbean, and the Haunted Mansion. Kraft honored the 25th Anniversary with performances by Michael Jackson and the Osmonds among others. John Forsythe and Drew Barrymore helped honor Disneyland’s 30th year, and the 35th Anniversary Celebration re-dedicated the park with Tony Danza, Jim Varney, and The Muppets. Ronald Reagan and Art Linkletter hosted the show, and the first girl and first boy to enter the park on opening day were special guests.

The 60th Anniversary show opened in black and white with dancers dressed in period clothing dancing on Main Street USA in Disneyland. After a few minutes, the picture became colored and the dancers, including Whitney Carson, also from Dancing With the Stars, magically transformed into modern day dancing costumes. Parade floats were revealed, and well-known Disney characters including Sully (Monsters Inc.), Tinkerbell, Rapunzel, and Sorcerer Mickey rode along while Pentatonix sang Be Our Guest and Jessie J, When You Wish Upon a Star. The exciting segment ended with fireworks behind Sleeping Beauty’s Castle.

As the show moved into the theater, Dame Helen Mirren drew attention with her Dolce and Gabanna dress made of children’s sketches. This was an appropriate choice since she introduced Walt Disney’s “big dream.” She explained that Walt’s dream became a reality on July 17, 1955 when 28,000 people visited Disneyland for the opening day when the asphalt and paint were still drying. We hear the voice of Walt showing the blueprints of Disneyland while various actors and actresses explain what Disneyland has meant to them.

Hilary Duff told us of the Lilly Belle, a train that Walt himself named after his beloved wife, Lillian. Josh Gad then revealed to the audience some behind the scenes secrets including the Dole Whip, which came to Disneyland in 1986, the Disneyland Dream Suite, and Walt’s apartment above the Main Street Fire Station. Gad explained Walt would turn on the lamp in the window to signal to his Cast Members that he was there and watching over. Since Walt’s death in December 1966, the light in both Disneyland and Walt Disney World has remained on representing Walt’s omnipresence.

John Stamos then identified with the audience as “fellow Disney Geeks” and introduced the first performers of the evening, Fall Out Boy, who did an amazing rendition of “Wanna Be Like You” from Disney’s Jungle Book. Dancers dressed as various animals including zebras, birds, monkeys, and lions made the song come to life.

Bryce Dallas Howard launched the preview of her new movie, Pete’s Dragon. It’s the story of a young boy who survives for six years in the forest with the help of a dragon whom he befriended. This movie, which comes out in the Summer of 2016, is another in the long line of Disney’s movies.

Howard explains that Walt created his first animated character, Mickey Mouse, when he was on the brink of failure. He lost all of his money, all of his employees, and his first character, Oswald. It was only because of Walt’s determination that he and Ub Iwerks, his only faithful animator, created Mortimer the Mouse who then, at the suggestion of Lillian Disney, became Mickey Mouse. Howard explained that Walt’s underdog spirit is evident in all of his movies even posthumously. Walt never wanted us to forget, though, that “…it was all started by a mouse.” Jennifer Goodwin and Jason Bateman were also on hand to represent their new movie, Zootopia. They explain that a common thread among Disney characters is that they have to have a heart. This makes them more real to viewers, and the process takes about four years to get it just right.

The rest of the show was a series of performances by music stars singing popular Disney songs. Jimmy Kimmel introduced Elton John who sang “Circle of Life”, Kelsea Ballerini welcomed Tori Kelley and Kermit the Frog for “Rainbow Connection”, and Sabrina Carpenter presented Idina Menzel for Frozen’s “Let it Go”. Kelsea Ballerini returned with Ne-Yo and Derek Hough for a compilation if Disney classics including The Little Mermaid’s “Part of That World”, Aladdin’s “Friend Like Me”, and Mary Poppins’ “Step in Time”, which ended with Dick Van Dyke! Little Big Town sang in Carsland, and Keifer Sutherland ushered in the Los Angeles Phillharmonic’s performance of Fantasia’s “The Sorcerers Apprentice”. The show came full circle when Elton John performed his new song, “Wonderful Crazy Night”.

Other notable activities included Neil Patrick Harris encouraging us to #shareyoureaers to raise up to one million dollars for Make a Wish and Kerry Washington proudly stating that many Disney movies depict strong female characters.

About 30 minutes in, Derek Hough encouraged the at-home audience to download the Disney Applause App. The technology was created in 2012 as Glow with the Show then was renamed Made with Magic a year later. Hough said that fans at home could interact with the app during special performances like the first one by Elton John. Disney said users would be able to touch their smartphones and activate fireworks and sprinkle showers.

The video looks really cool, but I couldn’t get the app to work. Apparently I wasn’t the only one because many other people expressed their issues on the internet. Hopefully Disney can resolve this issue so we can enjoy the magic of Disney from our own homes in the near future!

BB8 and Harrison Ford, also known as Han Solo from StarWars, acquainted us with the new StarWars Land coming soon to every Disney Park while an orchestra played the well-known musical score. He says we’ll get to pilot the Millenium Falcon, battle the Resistance, and experience some of the most popular locales including the Cantina.

Let’s take a look at some of the new concept art:

Shanghai Disney Resort, opening June 16, 2016, received a prime spot at the end of the show. Priyanka Chopra, who is from Asia and stars in ABC’s hit show Quantico, told us that this park will be home to Storybook Castle, the largest of all of the Disney castles. There will be six lands including Tomorrowland, which will take a new spin on Space Mountain with Hyperspace Mountain inspired by Star Wars. Other lands include Treasure Cove and Adventure Island.

When opening Disneyland in 1955, Walt said, “…Disneyland is your land. Here age relives fond memories of the past, and here youth may savor the challenge and promise of the future. Disneyland is dedicated to the ideals, the dreams, and the hard facts that have created America… with hope that it will be a source of joy and inspiration to all the world.” It is only fitting that these words also closed Disneyland’s Diamond Celebration.

Do you enjoy seeing new concept art for Star Wars Land?  Looking forward to it arriving in the parks?