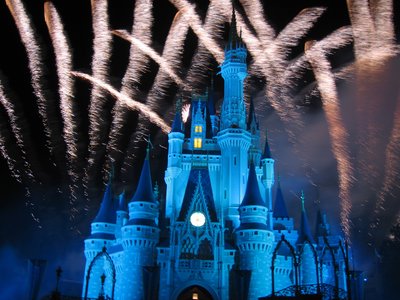 Disney knows how to throw a celebration every day, but that becomes especially true on New Year’s Eve. A place that puts on amazing fireworks shows every day definitely takes it up a notch on December 31.

If you are planning to ring in the new year anywhere on Disney property, be prepared for huge crowds. It is one of the busiest days of the year. And because of that, Disney will often stop new visitors from entering the parks. So plan to get there early, deal with crowds, and stay put until the new year comes.

Here are the top four places to ring in 2013 at Disney World:

The Magic Kingdom will put on the Holiday Wishes – Celebrate the Spirit of the Season fireworks show high above Cinderella Castle at 8:30 pm, and will also put on a special New Year’s Eve fireworks presentation at 11:50pm. Past shows have been amazing with fireworks launched from multiple locations around the park and the Seven Seas Lagoon.

If you like to dance, Epcot just be the place for you. DJ Scooter and DJ Mark Sanchez will be spinning tunes at selected pavilions around World Showcase. Disney will present Illuminations at 6:30p.m. and 11:40 p.m. Monsieur Paul in France will offer several seatings.  Enjoy a three-course meal between noon – 6:30pm for $75.  Seatings at 9:00 and 9:30pm include a four-course menu will be served for $195.  tax and gratuity are not included.

Mulch, Sweat, and Shears, the band that plays daily on the Studios ,will put on a several shows in the park starting at 2:30pm.  The final show is at 11:50 and will accompany a huge fireworks show to ring in 2014.

DisneyQuest will be open for a family-friendly celebration with DJs, dance parties, and Disney character meets – in addition to the usual arcade and virtual reality fun.

Do you like New Year’s Eve at Disney World?