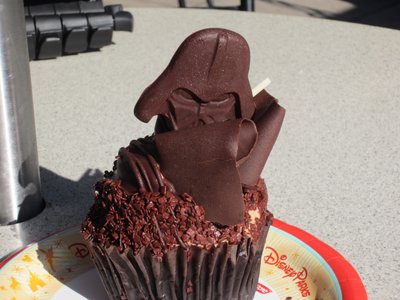 Disney has been doing a great job recently of offering special food items – from LeFou’s Brew in the new Fantasyland section of the Magic Kingdom to the amazing (depending on how you look at it) $9 cupcake in a treasure chest.

Now in honor of Star Wars Weekends at Disney’s Hollywood Studios, Mickey and friends are serving up some new food offerings themed to one of our favorite outer space films.

Who knew that Darth Vader was such a cupcake? Disney is offering a chocolate cupcake with chocolate icing and a milk chocolate representation of Mr. Vader himself on top. I tried one and it was very rich and very delicious. The cost was $4.95 – which really isn’t that crazy, is it? It is available in Darth’s Mall, ABC Commissary on Commissary Lane, Backlot Express in Echo Lake, Studio Catering Company and Pizza Planet – both of which are in the Streets Of America area, and Starring Rolls Café at the corner of Hollywood Blvd. and Sunset Blvd.

Checking out all the shows, character meet-and-greets, and shopping can make you oh so thirsty. For adults, Disney is offering two alcoholic drinks for sale in Darth’s Mall, each at a cost of $9.97. The first celebrates The Force and includes wildberry lemonade, Grey Goose vodka, and Chambord. The second celebrates the Dark Side and includes pomegranate lemonade, Parrot Bay coconut rum, Cointreau. Yum.

If you like getting food that gives you a collectible (like the Orange Bird sipper), then this serving of churros is for you. It comes in a plastic R2D2 container along with dipping sauce. You can buy this at the churro cart in front of The Great Movie Ride as well as Darth’s Mall and the pretzel cart.

Speaking of R2D2, you can also purchase a few other R2D2 themed food items:

You can purchase a R2D2 corn dog bucket with chips available at Herbie’s Drive-in (which is located next to the Lights, Motors, Action! Extreme Stunt Show in the Streets Of America section of the park).

You can purchase R2D2 R2-D2 “Kids’ Power Pack Buckets” (which includes a milk, chips, cookie, and cheese stick) which are available at the Sunset Ranch Market on Sunset Blvd., the ABC Commissary on Commissary Lane, the Backlot Express in Echo Lake, Studios Catering Company in Streets Of America, and Pizza Planet Arcade which is also in the Streets Of America area.

And finally you can purchase some frozen treats in an R2D2 cup: frozen lemonade at Anaheim Produce, a milk shake at Min & Bill’s Dockside Diner and 50s Prime Time Café in Echo Lake, or a hot fudge sundae which is available at Sci-Fi Dine-In Theater Restaurant in Commissary Lane.

What do you think about these Star Wars food options?