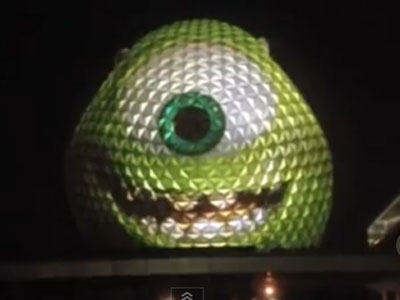 The entire Disney Company is pulling out all the stops to promote the new “Monsters University” prequel movie which opens in theaters on June 21, 2013.

At Walt Disney World, Disney is announcing these promotional events under the title of “Monstrous Summer”.

Let’s take a look at what is going on:

This is one eye-opening special effect! (Yes, the pun was intended.) Using an advanced projection technology, Disney has turned the entire Spaceship Earth show building into one huge, animated Mike Wazowski. The effect is amazing, as seen in this video:

Sources state that the effect will likely be used during a press conference. I hope it will be around for the rest of us common folks to see too. It’s very cool.

While this is the first full color animated projection on Spaceship Earth, Disney has done other special projections on the structure – like for the 30th anniversary of Epcot.

As Disney has done several times in the past to promote movies like Tron or The Avengers, Disney has wrapped monorail teal with images of Monsters Inc characters. Unlike other wraps that covered the entire vehicle, this has more the effect of showing the characters sticking out of the windows of the monorail.

Rumors persist that, as part of the Monstrous Summer event, the Magic Kingdom will be open for 24 hours straight on Friday, May 24. This has not been officially announced, so stay tuned.

What do you think about these promotional events?