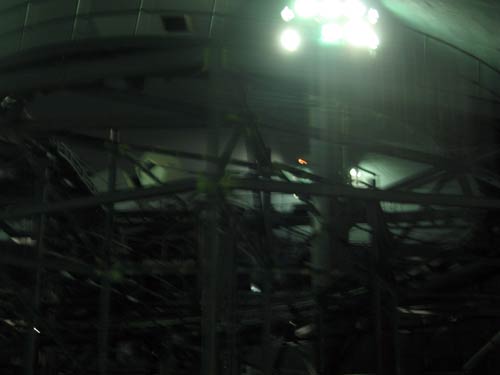 Space Mountain With The Lights On (Video)

If you are like me, you enjoy Disney on many levels. You like the entertainment, the characters, the technology, and the quality of the showmanship across the Disney enterprise. You experience it all as a guest, just the way Disney wants you to see it.

But there is another part of me that loves to look behind the scenes. I guess that is why people get all worked up over the videos by Adam The Woo of the dilapidated River Country. You have great memories of the place and want to know as much as possible about how it works and the details of it – even if that means looking at an overgrown water park in disrepair.

Disney is understandably very protective of its image. Disney as strict “on stage” and “off stage” locations so that nobody ruins the illusion they carefully create.

But occasionally you can legally get a peek behind the scenes.

As my car went through Space Mountain, I saw something you don’t often get to see: Space Mountain with the lights on. I got to see the winding track and the hulking superstructure of the mountain itself.

It wasn’t beautiful, but like all things that are behind the scenes, it was fascinating for a Disney fan.

Here is a video that someone else shot when riding Space Mountain with the lights on:

Have you seen Space Mountain with the lights on?