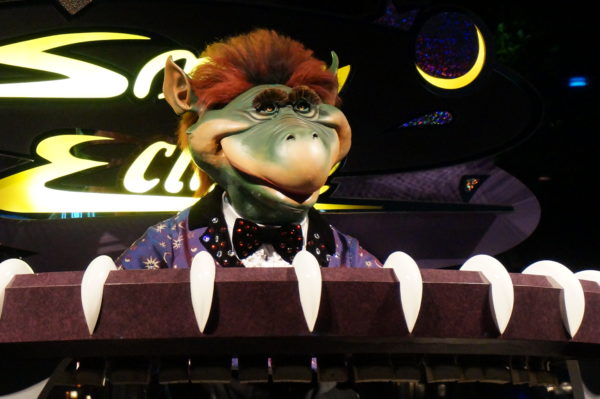 Sonny Eclipse is the resident lounge singer of Cosmic Ray’s Starlight Café in Magic Kingdom‘s Tomorrowland. He made his debut appearance in 1994 when Cosmic Ray’s, formerly known as Tomorrowland Terrace, was rethemed to represent the new backstory of Tomorrowland.

Sonny Eclipse is quite an interesting alien. Let’s take a look at seven secrets about Sonny.

1. Sonny has a strong resume.

Before coming to Disney World, Sonny Eclipse, or rather his audio animatronic, was the baggage screener at Tokyo Disneyland’s Star Tours.

Besides being a singer and comedian in Disney World, he says that he occasionally plays weddings and nightclubs across the galaxy.

2. Sonny’s instrument is an astro-organ.

The instrument that Sonny plays is called an astro-organ. This “out of this world” instrument has a glowing keyboard and it can even play itself. Usually, Sonny plays the organ for accompaniment during his 27 minute set of music and jokes.

Sonny, who is described by his announcer, Mike Feedback, as the “biggest little star in the galaxy” says that he is from Yew Nork on the Planet Zork. He describes his town as “topsy turvy… where subways are up and streets are down.”

Cosmic Ray’s is the first Earth restaurant franchise from Outer Space, so Sonny is pretty lucky to have landed this gig.

4. His songs are all original.

The songs are jazzy, and Sonny describes them as “eclipso”.

These songs were co-created by Disney Imagineer and Composer George Wilkens and Singer/Songwriter Kal David, who also supplies the voice for Sonny. Wilkens also wrote and arranged the music for the Food Rocks attraction in Epcot and for Honey, I Shrunk the Audience in Disney’s Hollywood Studios.

Wilkens and David recorded the vocals for Sonny in Wilkens’ home studio.

Sonny is the quintessential lounge singer. He sings cheesy songs, but he also tells corney jokes like, “You know, I recently heard the universe was expanding. Guess it’s time to loosen the asteroid belt!”

How fun is that!

The Brunettes recorded the music for the Space Angels in Wilkins’ home studio as well, but they were all three squeezed into a small sound booth supposedly with Wilkins’ washer and dryer.

Before Sonny arrived, live entertainment by Michael Iceberg and the Iceberg Machine performed daily on the stage. There’s still room for live entertainment; Sonny and his stage will just rise up into the ceiling making way for the live performers. However, this hardly ever happens.

Do you listen to Sonny Eclipse while you dine at Cosmic Ray’s?