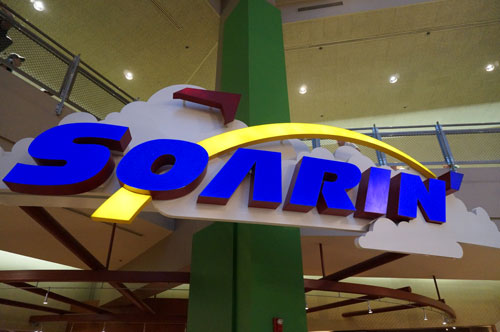 Walt Disney was an amazingly creative man, but even the most imaginative person needs to draw inspiration from somewhere.

Walt was well traveled not only in the US, but also around the world, and those travels became a guiding light first for his Disneyland theme park and then for Walt Disney World Resort in Florida. Since then, his Imagineers have drawn from his genius as a catalyst for five more theme parks and countless attractions.

One of the newest attraction to the Disney Parks is Soarin‘ Around the World, which replaced the ever-popular Soarin’ at Walt Disney World (and Soarin’ Over California in Disney’s California Adventure).

The original film opened in Disneyland’s California Adventure on February 8, 2001 then was added to Disney World’s Epcot on May 5, 2005. As an aside, this is why you might hear the Cast Member say, “Welcome to flight 5505” as you’re preparing to enter the theater.

Soarin’ remained a very popular attraction for more than a decade with some of the longest wait times in Epcot. At the 2015 D23 Expo, Disney announced that Soarin’ would receive a makeover with the opening of Disney’s newest park in Shanghai. On June 17th, just one day after its premier in Shanghai, the film debuted in Orlando.

Guests were not disappointed. Especially for the biggest Disney fans, the Imagineers embedded some special surprises just for you! Here they are.

Let’s see if you can spot them during your next flight!

The Matterhorn, a 15,000-foot tall mountain situated on the border between Switzerland and Italy, was a favorite vacation spot for Walt and his family. It’s known as one of the highest summits in the Alps, and it was featured in the 1959 film Third Man on the Mountain. After visiting the area, Walt asked his Imagineers to recreate the mountain in all of its majesty in Disneyland.

The resulting attraction was The Matterhorn Bobsleds, the first tubular steel, continuous track rollercoaster in the world. The Imagineers wanted to give this important attraction its due regard, so they included it in the Soarin’ Around the World video.

Can you spot the Abominable Snowman?

The Great Wall of China, a 13,000-mile long structure built along the northern border of China, is actually a series of walls that were eventually joined together. It served as protection from invaders and later as border control.

China has a rich history of dynasties, and the people are very proud of their country and its historical architecture. In fact, the Great Wall was designated a UNESCO World Heritage Site in 1987.

Today, in the Epcot China pavilion, guests can see a film called Reflections of China.  However, when the China pavilion opened on October 1, 1982, the film was called Wonders of China.

The Great Wall section of Soarin’ Around the World is shot from the same location as the original Wonders of China movie that appears in the China.

Those who are familiar hip with Epcot history will recognize this nod.

Neuschwanstein Castle in Germany‘s Southwest Bavaria is a 19th Century Romanesque Revival Palace situated high atop a hill. It was originally built as a retreat for a recluse king and was opened to the public after Ludwig II, who commissioned the castle, died in 1886.

The castle, also known as New Swanstone Castle, is pictured in Chitty Chitty Bang Bang, The Great Escape, and most notably, is the inspiration for Sleeping Beauty Castle in Disneyland, CA and later Hong Kong Disneyland and Disneyland Paris.

Are you a fan of Soarin?