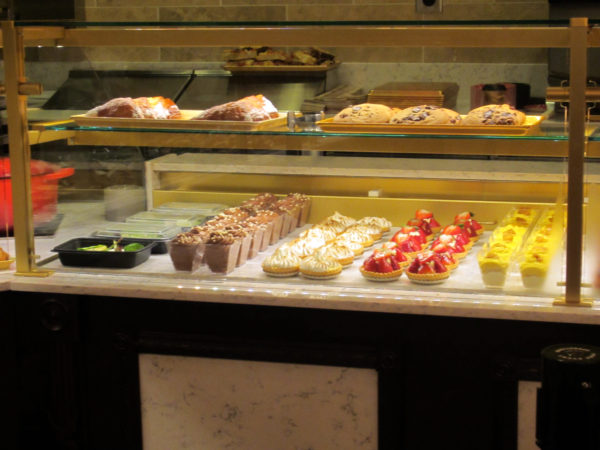 Snacking Around the World (Showcase)

I like all of the Disney World Parks for different reasons, but one of the reasons  I love Epcot is because it’s like two parks in one. I can get my thrills in Future World then travel the world in a day in World Showcase.

Each of the 11 themed pavilions represents a different country with unique and authentic shopping, entertainment, and dining.

Today, we’re going to take a look at some snacks and small plates while we snack around the world!

Our first stop in World Showcase is Mexico. There are a ton of good quick-service and table-service locations here, but we’re going to go to La Cantina de San Angel for the churritos. They’re a perfect mix of crisp fried dough sprinkled with cinnamon sugar and topped with caramel dipping sauce. These are so good, and they can easily be labeled as a breakfast item, though not a very healthy one, because they’re very much like a doughnut!

After you’ve explored Mexico for a while, move clockwise around the lagoon and arrive at Norway. There is some interesting dining options in Norway, someof which will be unfamiliar to the average diner. It’s not a very friendly place for the super picky eater. However, if you head into Kringla Bakeri Og Kafe, you’ll find Viking Mousse. This creamy, rich mousse is shaped somewhat like an ear hat, and it’s so good! It’s a chocolate outer shell with a creamy mouse center and cookie horns.

In China, we’re going to stop by the Joy of Tea outpost. The tea here is pretty awesome, but if you’re looking for a really good snack, which we are, try out the chicken curry pocket. It looks like a turnover with flakey pastry crust, but inside is a delicious chicken curry with a bit of a spicy kick.

The Karamell Kuche in Germany is actually considered a shopping location, but they sell consumable goods, so it counts! Karamell Kuche sells the classic German candy, Werther’s Original. These hard caramel candies are great for sucking on throughout the day, so pick up a bag and save it for later. Right now, we’re focusing on the chocolate covered everything in this store! From popcorn and pretzels to fruit, caramels, s’mores, and marshmallows, there’s something chocolate covered for everyone here! And it’s oh-so good!

You can’t visit Italy without trying some gelato! Stop by Gelati, the Italian Gelato Kiosk in World Showcase and get your fix! This cold, creamy form of Italian Ice Cream is less creamy than we’re used to in the States, but you won’t mind because it’s delicious!

The American Adventure features some traditional American favorites. My suggestion is the Strawberry Topped Funnel Cake. This fluffy, sugary snack is available at The Funnel Cake Stand, and there are actually more toppings available than just strawberries. Plus, in true Disney fashion, this funnel cake is pretty large, so be sure to share it with a friend!

Japan is another pavilion full of table-service and quick-service dining options, but the really cool snacks here can be found in the Mitsukoshi Department Store near the back of the pavilion. This store sells lots of cultural candy and snacks, so you can get an idea of what the Japanese actually snack on!

The Tangierine Café in Morocco is a quick-service restaurant serving lunch and dinner daily. However, they also have a pastry case with lots of different kinds of snacks available. If you’ve never had authentic Moroccan Baklava, you have to try it here! They also have a variety of Baklava options available!

The Napoleon is a culturally significant dessert in French countries and was mentioned in cookbooks as early as the 18th century. It’s also called “mille-feuille” or “thousand leaf” for its flakey, crispy crust layered with creamy custard. You can find this legendary dessert in the France Pavilion in Les Halles Boulangerie-Patisserie.

If there’s one thing that the United Kingdom is known for, it’s their tea. The Tea Caddy in the UK Pavilion in Epcot is mostly for shopping, but, like the Mitsukoshi Department Store, they also have culturally specific candies and snacks. Specifically, look for the variety of pre-packaged crackers and pastries. They’re salty and sweet and perfect to curb your craving!

The Canada Pavilion is known for their delicious table-service restaurants and their amazing steaks. However, since the Beaver Tails outpost was removed in the early 2000s, they’re missing a quick-service location. Fortunately, there is a nearby Refreshment Port just before this pavilion that sells a newer Canadian dish: the Cronut, which is a doughnut croissant. This crispy snack is a perfect start or finish your day in World Showcase!