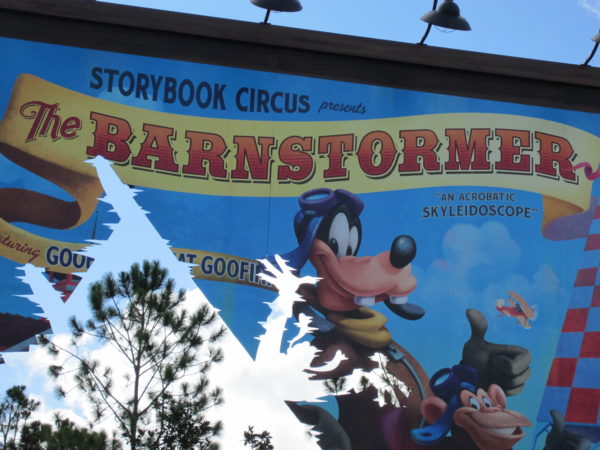 An Acrobatic Skyleidoscope - The Great Goofini

Looking Back at Skyleidoscope: An Epcot Aerial Spectacular

Just a few years after Epcot Center opened, Disney wanted to create a daytime spectacular as impressive as the fireworks that took place at night. Their first attempt toward this goal was Skyleidoscope: An Aerial Spectacular, which opened in September 1985.

The 15-minute show featured the park’s mascots, Dreamfinder and Figment of Journey into Imagination. It took place on the 45-acre World Showcase Lagoon with over a hundred ultra light seaplanes, jet skis, sailboats, dancers, musicians, singers, and actors coming together to create a “colorful fantasy-land of purple dragons, exploding gumdrops, and whimsical flying machines.”

The story goes that Dreamfinder wants to create a world full of rainbows, but evil forces in the form of dragons known as Ma, Pa, and their ten dragonettes prevent him from doing so. However, the fire-breathing dragons were no match for the World Showcase Airforce, which Dreamfinder summoned to help his cause. The good guys rallied and defeated the dragons turning them into tiny dragonflies.

It was a spectacular show, and it packed the World Showcase Lagoon as much as IllumiNations does today. The show initially took place on the weekends, but was expanded into the mid-week and then every day to accommodate heavy crowds.

To make the show possible, Disney created a private ultra light flight park in the area that is now Disney’s Art of Animation Resort, which is just a stone’s throw away from the Lagoon. The area was first used to launch the aircraft for Skyleidoscope and later used for another show called Surprise in the Skies.

Skyleidoscope wasn’t without issues, though.

Originally, Dreamfinder was supposed to fly in a huge blimp with paddles, but the Florida winds often made it difficult or impossible to take off and maintain stability, so this part of the show was canned.

Then on August 1st, 1987, just two years into a fantastic run, tragedy struck when pilot Rick Harper crashed backstage during a practice session. The wing of the plane disconnected from the fuselage and folded backwards. He tried to parachute out, but his chute got caught in the wing, and Harper passed away. While other planes were practicing in the area, no other planes were involved and no one else was injured. Fortunately, no guests were even aware of the tragedy until they saw it on the news, but Cast Members were witness to the tragic event.

When something like this happens during a Disney show or attraction, Disney sometimes decides to close the show. After Harper’s death, the afternoon show was cancelled and all others were suspended. Disney never made an official announcement, and the show quietly ended.

Do you remember Epcot’s Skyleidoscope?