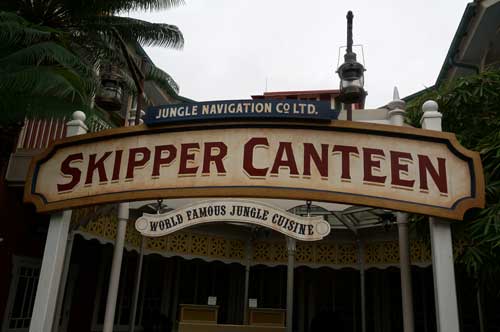 The Skipper Canteen Restaurant in the Magic Kingdom: Adventure Awaits

Guest visiting the Magic Kingdom now have another dining option. The Jungle Navigation Co. Ltd. Skipper Canteen is the newest table service dining location, and it is located in Adventureland.

The theme of the restaurant ties into the nearby Jungle Cruise attraction. The backstory is that the skippers from the “World Famous Jungle Cruise” use the Canteen as their mess hall and as a place to rest between cruises.

No Reservations Required – Or Available

It is interesting to note that, at least at the time of its opening, the Skipper Canteen does not accept reservations. Guests can walk up, submit their name, and either be seated in a short period of time or submit their phone number to get a text message when their table is ready.

The Skipper Canteen does accept the Disney Dining Plan. Meals require one table-service entitlement. Currently the Canteen does not accept the Tables in Wonderland discount card.

The Skipper Canteen is made up of three different rooms.

The largest of the rooms, the Mess Hall, is an open space with plenty of jungle artifacts and a number of visual jokes throughout. There are plenty of details for those who seek them out, but the overall design is a bit simpler as you would expect in a mess hall.

The Jungle Room, as the backstory goes, was the parlor for the restaurant’s owners, the Falls. The details are beautiful, and include unique paintings, collectibles from jungle voyages, unique lighting, and an amazing collection of huge, colorful, real butterflies showcased in glass.

The music playing throughout the restaurant was reminiscent of the early 1900s.

Just as Be Our Guest broke ground in the Magic Kingdom by introducing alcohol to the park, I believe the Skipper Canteen breaks ground by offering unique and adventurous dining choices.

Drinks included some unique choices. Exotic Coca-Cola choices, with free refills, were Guarana Kust from Brazil and Fanta Melon Frosty from Thailand. Punch Line Punch (get it?!?) and Schweitzer Slush were the specialty drinks on the menu.

There were plenty of appetizers, including the Falls Family Falafel and steamed Shu Mai dumplings with a tasty dipping sauce.

Personally, I loved the Skipper Canteen. The theming is beautiful, it fits its surrounds in Adventureland, the Cast Members play their roles well with a few corny jokes (not overdone at all).  The food offers amazing and unique choices that once again blows away the no-longer-true “all you can eat in the parks is burgers and fries” story that still plagues the Disney theme parks.

I believe that the Canteen will join the ranks of Be Our Guest and maybe even Cinderella’s Royal Table as one of the most popular dining locations in the Magic Kingdom – at least for somewhat-adventurous adults.

Will you try the new Skipper Canteen when you visit the Magic Kingdom?