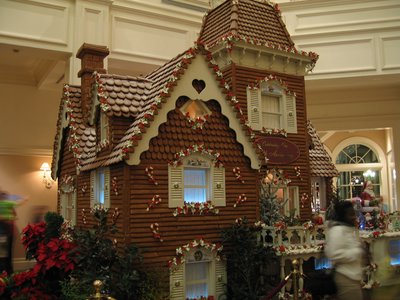 Disney knows how to do Christmas. They have a staff of people and a huge warehouse (which you can see on the Backstage Tour) located behind the Magic Kingdom that is chock full of holiday trimmings. There are plenty of fun things to do all around Disney World at Christmas time.

Let’s look at six of the fun sights and events you can enjoy during the Christmas season:

Each year, some very industrious pastry chefs at Disney’s Grand Floridian Resort and Spa create a life-sized Gingerbread House. It is big enough for a Cast Member to stand inside and sell, what else, but gingerbread treats. The house itself is 16 feet tall. It is made with an amazing amount of ingredients, including more than 1,000 pounds of honey, 800 pounds of flour, and 600 pounds of sugar. Imagine the calories in that! It is a beautiful sight to behold, and you can see it for free it the main lobby of the hotel.

This popular parade at Disney’s Animal Kingdom gets an overlay of Christmas decorations as well as a new soundtrack that includes traditional Christmastime songs but with a funky, world-beat inspired twist. The Christmas-edition of the parade includes many of the elements from the standard parade, including colorfully costumed stilt walkers, animal puppets, and safari Jeeps – all decorated for the holidays. Be sure to hang around to the end of the parade to see Mickey Mouse waving goodbye from the last parade float.

Formally known as the Osborne Family Spectacle of Dancing Lights at Disney’s Hollywood Studios, this display of Christmas lights will put your over-achieving neighbor’s display to shame. The buildings in the Streets of America section of the park are literally draped in million of lights. But as if that were not enough, every 10 minutes a Christmas soundtrack plays the lights dance, or blink on and off, to the music. It’s a truly immersive and amazing effect. And the story behind the lights, of Osborne Jennings simply wanting to delight his daughter with a Christmas display, is amazing unto itself.

Many families make this retelling of the traditional Biblical Christmas story a special part of their holiday celebration. A huge live orchestra, mass choir, and celebrity narrator come together to celebrate with beautiful music and staging. Narrators include folks like Whoopi Goldberg, Geena Davis, Gary Sinise, Blair Underwood, and Neal Patrick Harris. The event takes place in the America Gardens Theatre, directly across the promenade from The American Adventure in the World Showcase section of the park. There is no extra cost to see the performance, but it does fill up early. Be sure to book a dinner package that offers reserved seating, or arrive very early to ensure a seat.

Just as the magical elves (or maybe workers getting paid overtime) drape lights around Disney’s Hollywood Studios for the Osborne lights, they sprinkle some similar magic in the Magic Kingdom by placing lights on Cinderella Castle. Disney drapes more than 200,000 twinkling lights on the towers and turrets of the Castle, turning it into a beautiful, shimmering, ice-like work of art.


Cinderella’s Holiday Wish lights up the Castle each evening.

Taking place on select evenings in November and December, Mickey’s Christmas Party is a special evening event that requires a separate entrance ticket. Check out special stage shows, fireworks, and Mickey’s Once Upon A Christmastime Parade featuring who else but Santa Clause. You can also enjoy all the free hot chocolate and Christmas cooks you can eat. Visit with Disney characters decked out in their holiday clothes and be sure not to miss the snow fall on Main Street USA. Yes, Disney can actually make it snow in Florida.

What do you think about these special Christmas treats?