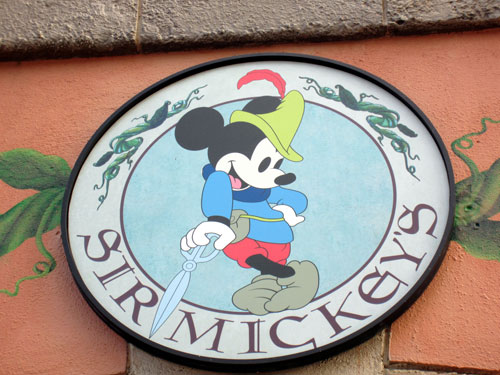 In the shadow of Cinderella Castle, you can find a shop that is big on fun. It is easy to overlook, but if you seek it out, you will be glad you did.

Sir Mickey’s is located between Princess Fairytale Hall and the Castle. What makes this shop special isn’t necessarily the merchandise but the design and theme of the store itself.

Disney designed Sir Mickey’s to blend in nicely with its location just a stone’s throw away from the Castle. You will find plenty of turrets, thick wood, and ancient-looking glass in the windows. The shop itself is rather large, but a low ceiling and the general layout and design make it seem more intimate.

The first movie that influences the stop is a Disney’s short called “The Brave Little Tailor”. This 1938 work is based on a German fairy tale called “The Valiant Little Tailor” which was documented by the Brothers Grimm. In Disney’s edition, Mickey Mouse has the lead role. Mr. Walt Disney himself provided the voice for Mickey.

“The Brave Little Tailor” was actually nominated for an Academy Award in the Best Animated Short Film category, but it lost out to another Disney short called “Ferdinand the Bull”.

The story of “The Brave Little Tailor” tells of a kingdom that is terrorized by a giant. The king is looking for someone to kill the giant.

Mickey lives in that kingdom where he works as a tailor. One day he was being bothered by seven big flies, and he managed to kill them all at once. When someone asked Mickey if he ever killed a giant (referring to the real giant), Mickey responds, “I killed seven [flies] with one blow!” With this mix up, and a promise that the person who tames the giant can marry the princess, a lovely Minnie Mouse, Mickey sets off to use his sewing skills to tame the giant. In the end, he saves the kingdom and marries the princess.

The second movie that influences the stop is Disney’s “Fun and Fancy Free” from 1947. A segment called “Mickey and the Beanstalk” is a take on “Jack and the Beanstalk”. Playing the role of Jack, Mickey finds the castle of Willie the Giant by using some magic beans to grow a beanstalk.

Interestingly, “Mickey and the Beanstalk” was the last time that Mr. Walt Disney provided the voice for Mickey Mouse in a Disney movie. He had become too busy with other projects to voice Mickey.

You get a sense for the theme of the shop even before you enter. The window displays include Donald Duck, Daisy Duck, and Donald’s three nephews, Huey, Dewey, and Louie, all decked out in period costumes.

Inside you can find Mickey dressed as a tailor, a reference to the first film “The Brave Little Tailor”.

Something else you will see is a huge beanstalk winding its way outside and inside the store. You can also see the giant, Willie, lifting up the ceiling with his huge hands as he looks for Mickey. This is a reference to the second film “Mickey and the Beanstalk”.

The next time you pass through Cinderella Castle, take a minute to stop in Sir Mickey’s. You will get to see a fun little shop and tributes to two classic Disney movies.