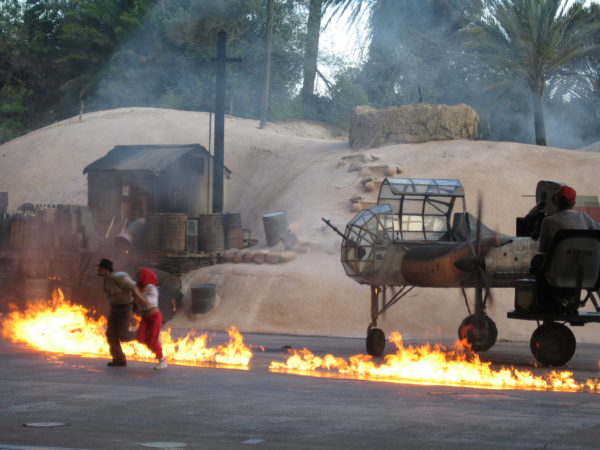 Disney’s Hollywood Studios has some pretty impressive rides. Tower of Terror is the only drop sequence ride in Disney World, and Rock n Rollercoaster is the only one with inversions. When Star Wars: Galaxy’s Edge opens, there will be even more exciting attractions for the thrill seeker.

But what about non-thrill seekers? What about people who like to keep two feet planted firmly on the ground and just be entertained? We’ve been talking about those people this week with a Shows Only Disney World Vacation option! There are plenty of shows all around Disney World, so you never have to step food on a ride, and you can still enjoy lots of attractions!

Let’s take a look at shows in Hollywood Studios!

Citizens of Hollywood, an improv acting troupe, appear anytime, anywhere on Hollywood Boulevard. They are entertaining, comedic, and very friendly. They’re a similar, though updated, version of Citizens of Main Street over in Magic Kingdom.

Beauty and the Beast – Live on Stage

Beauty and the Beast – Live on Stage is a theatrical retelling of the story from Disney’s Beauty and the Beast movie. The show is abbreviated at bit to fit into a 25-minute time slot, but it is excellent and very well done! Just visit the amphitheater on Sunset Boulevard to see the show!

Voyage of the Little Mermaid is a sing-along stage show with puppets and live performers. This 17-minute show in Animation Courtyard is lots of fun for the whole family!

Disney’s little-kids channel has long had a home in Animation Courtyard. The newest show is Disney Junior Dance Party. It’s great for little kids who love Disney Junior, and they’ll get to see some of their favorite characters like Doc McStuffins, Lion Guard, and Vampirina. Mickey even makes an appearance in his Roadster Racer! This high-energy show, which includes a DJ, encourages your kids to get up and dance, so you don’t have to worry about them getting restless!

For the First Time in Forever: A Frozen Sing-Along Celebration

Frozen was big business in Disney World when it became an instant success. For the First Time in Forever: A Frozen Sing-Along Celebration was one of the first to be introduced, and has remained popular. In the Echo Lake section, guests hear from two royal historians who retell the story of Anna and Elsa through song. Guests are encouraged to sing along, and lyrics appear on the screen!

The Indiana Jones Epic Stunt Spectacular is also in a theater in the Echo Lake section. This exciting show features the classic Indiana Jones character battling foes, but he needs some help to do it. His assistants choose some volunteers from the audience to help out! The premise of the show is that a movie is being filmed, so they start and stop like directors would in a movie. It’s interesting and entertaining!

March of the First Order

Captain Phasma leads her Stormtroopers down Hollywood Boulevard to Center Stage in an impressive demonstration of the First Order’s obedience and strength.

As Star Wars prepares to come to the Studios officially this year, themed shows and attractions have appeared to build anticipation. Star Wars: A Galaxy Far, Far Away. This live show at the foot of the Chinese Theater brings famous movie scenes to life. Rey, Kylo Ren, Chewbacca, BB-8, and Darth Maul all make an appearance!

As you would expect from a park with a Hollywood theme, there is much fanfare especially as the sun starts to go down. One such show is Disney

Movie Magic, which begins around 8pm nightly at Grauman’s Chinese Theater. The show is like watching a movie under the stars and showcases Disney’s popular characters and stories plus historic movie moments.

Star Wars: A Galactic Spectacular is another nighttime spectacular that combines fireworks with projection technology using the Chinese Theater as a backdrop.

Disney’s long-running nighttime spectacular is Fantasmic! This 30-minute show in an amphitheater off of Sunset Boulevard pits good against evil as Mickey and his friends battle some of the most formidable Disney villains. The theatrics and effects in this show are pretty incredible!