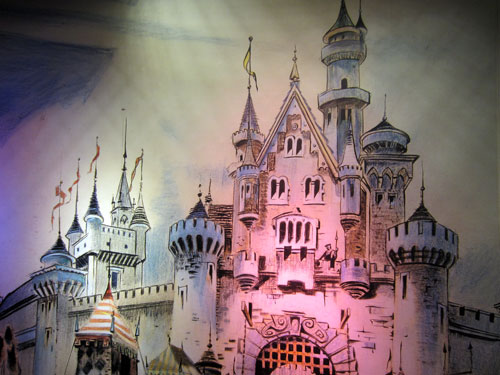 If you are a Disney fan, you probably have a “home park” – the Disney Park that you visited first, or visited most often, or enjoyed the most. For many folks in the eastern half of the United States, plus plenty of folks in Europe, the Walt Disney World Resort in Florida is their home park.

While you might really enjoy your home park, you might also wonder if you should venture to a different Disney Park to see what it is like. I think that is a great idea!

To help you consider whether you, as a Disney World fan, should plan a vacation to Disneyland in California, let’s compare the two parks:

From the perspective of raw acres of land, Disneyland is definitely smaller that the vast Walt Disney World Resort. However, the crafty designers back in the day still managed to squeeze plenty of fun into a small footprint. Over time, the Disney organization has managed to put many of the most popular attractions in both parks even though some are unique to one park or the other. At Disneyland, the smaller size has some advantages. It easy to walk between the two parks (Disneyland and Disney’s California Adventure) and Disney Springs without stepping foot on a bus.

During the slower parts of the season, Disneyland may not show their evening spectaculars (like Fantasmic) every night. This is where you may need to do some extra planning if you have your heart set on seeing a certain show.

The folks at Disney World think that planning ahead is so important that they spent $1 billion building out FastPass+ to help you schedule attractions and other events in advance. There is no FastPass+ at Disneyland (at least not yet), and somehow many lines at the park don’t seem to grow as long as those at Disney World. This allows folks to enjoy the attractions and dining options around Disneyland with less planning and more spontaneity.

While Walt Disney personally scouted the land that ended up becoming Disney World, he never saw the finished project. At Disneyland, however, Walt personally worked on many of the attractions. Disneyland still keeps a light burning in Walt’s personal apartment that sits over the Fire Station.

Walt Disney World has an amazing array of resorts, in upwards of 30 if you include Disney Vacation Club properties and the Swan and Dolphin, which are on Disney property but are operated by Westin. Compare that to the three options on the west coast: the Disneyland Hotel, Disney’s Paradise Pier Hotel, and Disney’s Grand Californian Hotel & Spa. With all due respect to Disneyland fans, those first two options look just like most other high-rise hotels, at least from the outside.

Since Disneyland is smaller, there are far fewer restaurants and simply less variety. However, you can still get some prime meals out west at places like Café Orleans and Steakhouse 55.

Each park has attractions and fun that can only be found in one spot or the other. There is nothing like Epcot‘s World Showcase out west, and there is no Cars Land or World of Color out east.

As you look at the list above, you see many words like “fewer”, “less”, and “smaller”. That doesn’t mean that Disneyland is any less fun that Walt Disney World! It’s just a different experience, but one that a Disney World fan will almost certainly love.

Which is your favorite: Disneyland or Walt Disney World?